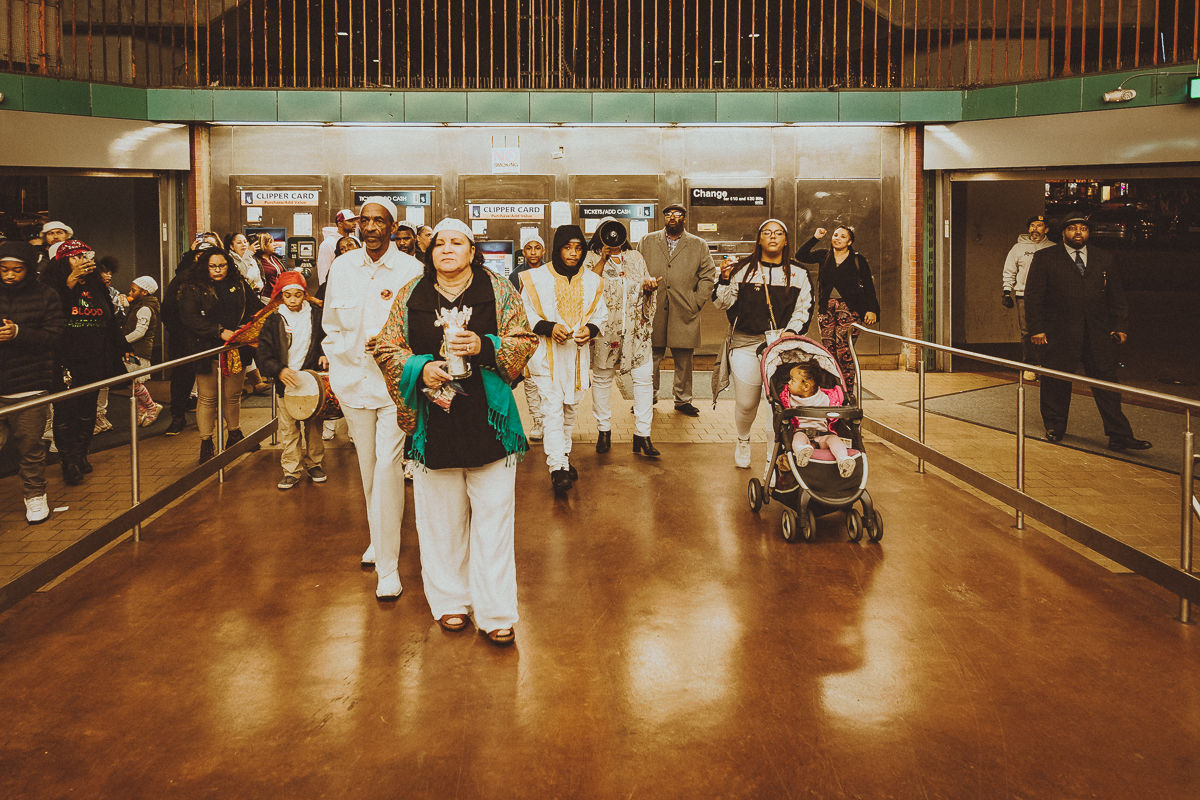 One year after the slaying of Sahleem Tindle, his fam­ily revisited the corner across the street from West Oakland BART Station, in front of the Upperkutz barber shop at 7th and Chester. When BART Officer Joseph Mateu ap­proached the corner on Jan. 3, 2018, there were two men in an altercation, scuffling on the ground, where a gun was in proximity.

Mateu decided Tindle was the aggressor, and shot him three times in the back. The bodycam footage of the shoot­ing sent the Tindle family into a rage, as they found the kill­ing of their loved on to be en­tirely unjust.

District Attorney Nancy O’Malley disagreed. In a 48- page report released to the public, the district attorney de­picted Tindle as the aggressor in an argument over a pair of sneakers. No criminal charges were brought against Officer Mateu for the shooting.

This year, the family stood with members of the He brew community in protest of O’Malley’s decision, and to remember Sahleem Tindle through song, poetry, and speech.

“It is natural for us to be to­gether,” Sahleem’s mother, Yolanda Banks Reed, said of the surrounding community, “but not for this reason.”

After two hours in front of the West Oakland BART station, protesters filled the station’s vestibule, the sounds of their chants resounding through the building, before they marched to the corner where he was shot, and back.

They returned to a gated up BART station, with at least 9 BART officers inside.

Protesters chanted “Who shut you down? We shut you down!” in an apparent expres­sion of strength in their unity.

But during the night’s earlier speeches, many expressed frus­tration in their little impact on the criminal investigation into their loved one’s killing.

“I don’t know about you, but I’m tired of these rallies and these marches and these funerals,” said Cat Brooks, a co-founder of the Anti Police- Terror Project and the runner-up in the mayoral race in Oak­land.

Despite the lack of criminal charges, the family is still pur­suing a civil case, represented by Attorney John Burris. “We want the department to appre­ciate that what’s going on here will not be tolerated,” Burris told the crowd of protesters and mourners.

But a civil case cannot pro­vide the family with satisfac­tory restitution. “There is no compensation for my son,” said Yolanda Banks Reed. “He’s ir­replacable.”

Tindle’s brother, LaRon Mayfield, said all he wants now is for Officer Joseph Mateu to be off the streets of Oakland. He said he will show the photo he obtained of Mateu as often as possible to make Mateu feel unwelcome in the city where he killed Mayfield’s brother.