By Christopher Frear, Center for Civil Rights History and Research

COLUMBIA, S.C. — As a child in South Carolina after World War Two, Celestine Parson Lloyd took part in a groundbreaking study to fight school segregation, a fight her parents and NAACP lawyers carried to victory in the U.S. Supreme Court.

On Jan. 15, Ms. Parson Lloyd, now of Mount Vernon, New York, relived a moment of that fight—and the victory—as part of the public panel “Recovering Untold Stories: An Enduring Legacy of the Brown v. Board of Education Decision” organized by the University of South Carolina Center for Civil Rights History and Research and the South Carolina African American Heritage Commission.

“I heard Harold Boulware, Thurgood Marshall, all the NAACP lawyers,” at the strategy meetings, she said. 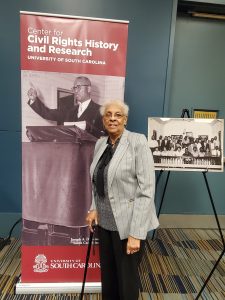 In building the legal case, pioneering psychologists Drs. Kenneth and Mamie Clark conducted a now-famous doll test with Summerton school children, including Ms. Parson Lloyd. They asked children which doll they liked better between a white doll and black doll and which one was the “good” one and the “bad” one to test the effects of segregation on children. Ms. Parson Lloyd recalled clearly that she had selected the African American doll.

“I knew it had something to do with the case,” she recalled. “As long as I knew it was something pertaining to the case, I would participate.”

After the panel discussion, researchers with the Center for Civil Rights presented Ms. Parson Lloyd with a copy of her test results from February 24, 1951, that they had uncovered during a visit to the Library of Congress.

“It brought back memories,” she said later. “I was elated. My parents, along with me, contributed to something so meaningful. It was important stuff for our society.”

At the panel, Ms. Parson Lloyd shared her detailed and sometimes harrowing memories of the desegregation struggle in Summerton.

In defiance of known threats, her parents, Bennie and Plummie Richburg Parson, agreed that her father should sign a petition championing the end of racial segregation in schools.

“Don’t take your name off the petition, even if you have to eat dirt,” her grandfather told her father as young Celestine listened. And her great-grandmother Angeline Brunson Parson, who lived to the age of 117, told stories of her life in enslavement and of emancipation.

“One night, my father wasn’t home,” Mrs. Parson Lloyd recalled, “and they came and they knocked on the door, and they said, ‘We were looking for this little lost boy,’ but that’s what they called men in the South, a boy. What they were doing was taking people out and they beat you and they mugged you and leave you somewhere, and if my father was home, he would have been taken out and probably beaten and left some place.

“And I was petrified. We were all afraid, because we didn’t know what was going to be the next day,” she told the panel audience.

The legal effort started with NAACP support in 1948, when Levi Pearson initiated a lawsuit against the Summerton School District to provide a school bus for his children. On a property line technicality, Pearson had to withdraw as the plaintiff and a new lawsuit had to be built with parents of Scott’s Branch School students.

At meetings in St. Mark and Liberty Hill AME churches in Summerton, Ms. Parson Lloyd listened intently as NAACP officers and lawyers explained the lawsuit and counseled parents about the violent response ahead. She is featured in several photographs taken of plaintiffs at local churches and now archived in University of South Carolina collections.

Along with the Parsons, Harry and Eliza Briggs, parents of five schoolchildren, were the first signers of the 1949 petition for “equal educational opportunities and facilities.” The signers refused to yield to violence, even when Harry Briggs was fired from his job and the De Laine family home was burned to the ground. Thurgood Marshall, Robert Carter and South Carolina’s Harold Boulware filed Briggs v. Elliott in federal court, directly challenging segregation.

“Each business place had a list of these petitioners, and, if your name was on there, you were fired, and you weren’t allowed to buy food in the grocery stores in that town.  You couldn’t buy gas for your car,” she said. 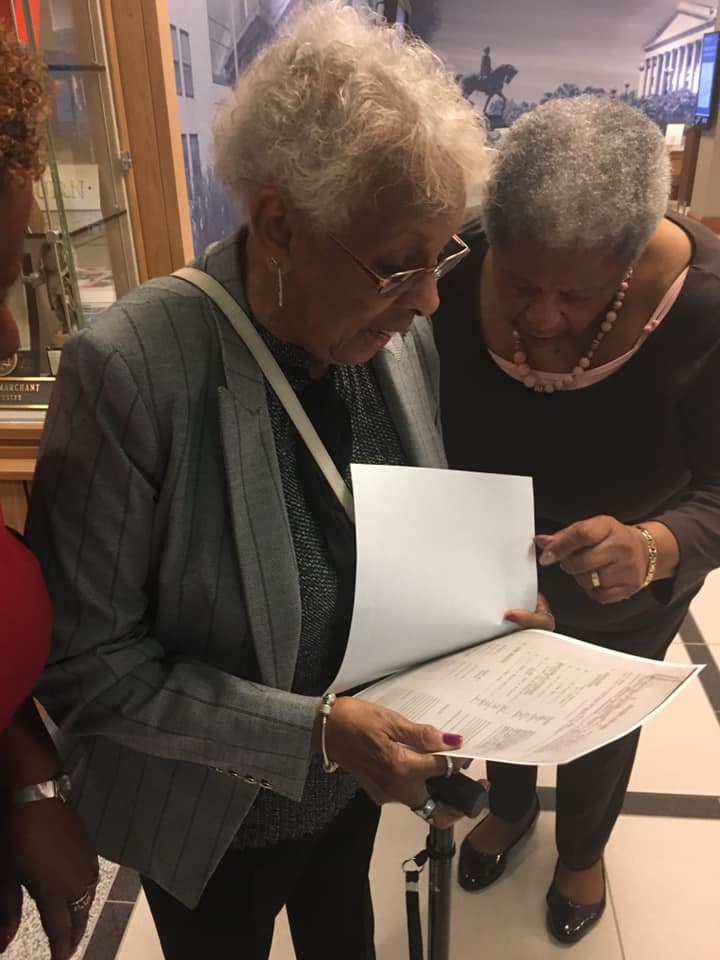 Celestine Parson Lloyd, left, and sister-in-law Annie Camacho look at her nearly 70-year-old test from Dr. Kenneth Clark’s famous doll experiment. Researchers at the University of South Carolina Center for Civil Rights History discovered the test at the Library of Congress and presented it to her on Jan. 15.

In 1951, the parents appealed to the Supreme Court. Although it was the first of the school desegregation cases to reach the court, it was placed behind the Brown v. Topeka Board of Education case, possibly because of the maneuvering of South Carolina Gov. James Byrnes. On May 17, 1954, the Parsons family, the Briggs family, and dozens of other unflinching South Carolinians were vindicated with the Supreme Court’s unanimous decision ruling segregation unconstitutional.

“When I got home from school, word was around,” she recalled. “My parents were elated, ‘We won! We won!’ The battle is almost over.”

Ms. Parson Lloyd graduated from Scott’s Branch High School in 1956 and departed for New York City, where she and her mother joined her father who fled Summerton amid repeated threats after the 1954 ruling. In New York, she worked on behalf of the poor and marginalized, retiring as an assistant superintendent of a women’s homeless shelter.

“By showing Civil Rights veterans the documents already preserved, we can help them recover memories. In turn, by recording their memories, we expand the history available to scholars and students,” Civil Rights Center Director Dr. Bobby Donaldson said. “We seek to document our state’s deep Civil Rights history, like the Briggs case—with donations of letters, photographs, newspapers—and to assist those who participated in historic events in chronicling their own histories.”

The Center for Civil Rights History and Research chronicles, preserves, and shares South Carolina’s vital history through community programs such as the “Recovering Untold Stories” panel, the “Justice for All” exhibit, and educational support that informs K-12 and higher education curriculum in the state. The Center was founded in November 2015 with the receipt of the congressional papers of Representative James E. Clyburn, the state’s first African-American member of Congress since the late nineteenth century and a veteran of the Civil Rights Movement. The Center’s website is located at www.civilrights.sc.edu.

Black voters are the cornerstone of the Democratic Party and the most reliable voting block.