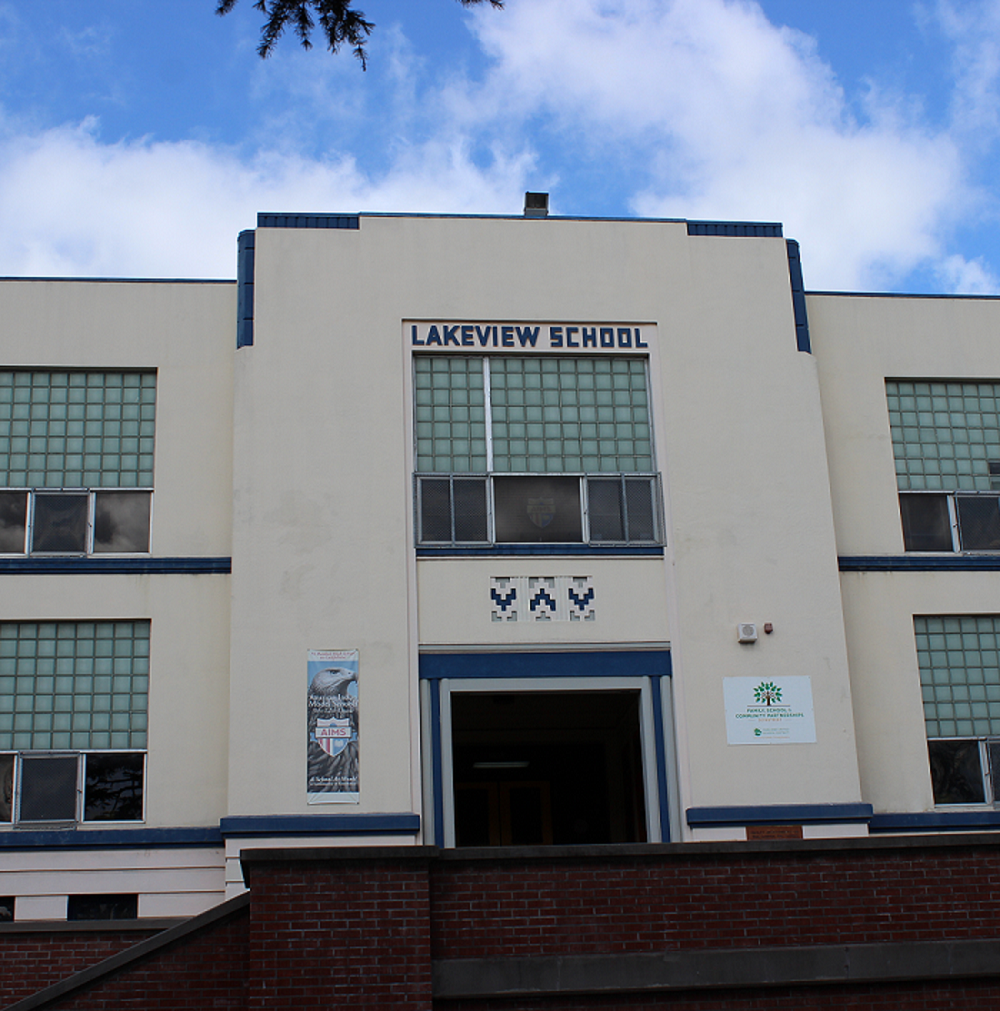 Former site of Lakeview Elementary School, a majority Black school which OUSD closed in 2012. Lakeview Elementary was a majority Black public school. Currently American Indian Charter School, a majority none Black school, has taken over its campus. The Reparations for Black Students Resolution would protect schools like Lakeview, who have at least 30% Black students, from facing closure. Photo by Zack Haber on March 9.

During a Oakland School Board meeting last month, the Board decided to delay a vote to approve The Reparations for Black Students Resolution until March 24, preventing the resolution from being approved during Black History Month and frustrating many who had organized and advocated for the bill’s passing.

​“There is not one Black family in OUSD that hasn’t experienced the pain of anti-Black racism in our schools,” reads a statement on reparationsforblackstudents.org, a website run by the Justice 4 Oakland Students Coalition in support of the bill. “Now is the time to look at the solutions from the Black community and invest in the remaining Black students.”

​The board slowly came to their decisions to delay during two hours of tense discussion, brief public comments, and votes from about 11:00 p.m. February 24 to 1:00 a.m. on Feb 25. Board Director Clifford Thompson prompted the process by proposing amendments to erase much of the resolution.

​“I back the resolution 100%, but I’m just taking out a few things,” said Thompson while proposing the cuts.

​Clifford proposed cutting all of the following from the resolution: protections to stop schools with 30% or more Black students from facing closure; requirements for the superintendent to implement a retention plan for Black teachers;creation of an emergency fund to help Black families affected by the COVID-19 pandemic to pay rent, protections for Black students with disabilities on Individualized Education Plans (IEPs), and all references to charter schools.

​The resolution contains about 1,650 words that, if passed, would require action from the Oakland Unified School District. Thompson proposed cutting about 1,300 of these words, or about 80% of the actionable language. Director Aimee Engproposed adding about 90 words to the resolution that direct the Board and superintendent to “seek public, private and philanthropic partnerships” that would “resource targeted investments to accelerate the academic outcomes and support the social emotional well–being of Black students.”

​Board members VanCedric Williams and Mike Hutchinson, who wrote the current version of the resolution, expressed deep frustration at the proposed cuts and changes to the bill.

​“Let’s not try to cut this down into a meaningless resolution and then walk away feeling good,” said Williams about Thompson’s proposed cuts. “We cannot play these games anymore. We really have to stand up to what our values are.”

​After about 30 minutes of discussion from Board members and Supt. Kyla Johnson-Trammell, Hutchinson called for the discussion of cuts to the bill to be ended and for the Board to vote on whether or not to implement it. All Board members except Hutchinson, Williams and student Board Director Jessica, Ramos voted to continue to discuss the changes.

​“Not only do I find this extremely offensive,” said Hutchinson upon hearing that the Board wanted to continue discussing changes to the bill, “but it sure feels anti-Black to me.”

​During the meeting Ramos claimed hundreds of students were texting her to express disappointment in the proposed changes to the bill.

​“This is very sad,” Ramos said. “You know when someone chews your food and then spits it back out? That’s how this feels.”

​Board member Sam Davis, however, claimed compromise and accepting less than what the community initially asked for was essential.

​​“You can’t take something exactly as written because you have to accommodate the reality you’re working in,” Davis said. “To me, something is better than nothing and this addresses some of the demands the community had brought forth.”

​Board President Shanthi Gonzalez pushed for a slower process that would allow more time to craft a bill that was “more acceptable and that everyone could live with.”

​“I think it’s just happening too fast,” said Gonzalez. “It would make sense to slow down. Everything our Board does is a product of negotiation.”

Williams and Hutchinson both claimed they had reached out to other Board members for their input on the bill and questioned why the changes were being presented during the meeting instead of beforehand.

​“You said you thought this was moving too fast, now you’re trying to re-write it on the spot,” said Hutchinson. “You didn’t try to do this last week when it was originally written.”

​Before voting on the proposed amendments, the Board heard public comments. All 15 people who were allowed to speak opposed the amendments and called for the Board to approve the original resolution. Dozens of other Oakland community members asked to speak, including District 3 Council-member Carroll Fife, but were not allowed to.

​After hearing public comment, the Board voted on whether to accept Thompson and Eng’s amendments. Ramos abstained from voting. Williams and Hutchinson voted “no.” All other Board members voted to accept the changes, and the amendments passed.

​Then Williams made a motion to ask the Board to vote on whether or not to change the name of the resolution, as it stood in its current form, to ‘The White Supremacy Resolution,’claiming that it now did the opposite of what it had originally set out to do.

​“That wasn’t hyperbole and he wasn’t joking,” said Hutchinson after seconding Williams’ motion. “You turn Black reparations into another exercise in white supremacy.”

​Ramos, Williams and Hutchinson voted to approve the motion to change name of The Reparations For Black Students Resolution to The White Supremacy Resolution, while all other Board members voted against the name change.

​After more discussion of the bill, Gonzalez suggested taking more time to compromise on a version of the resolutionthe Board could agree on and admitted that the current version was “substantially different” from the original one. Williams agreed as long as discussions about changing the bill could start from its original form.

​“Please stop messing with this,” he said. “Put it back to the original and we’ll debate it.”

​All Board members voted to restore the resolution back to its original form, except for Thompson and Board Director Gary Yee, who voted to keep the amendments.

​Then the Board voted to delay the vote to approve the Reparations for Black Students Resolution until March 24. On that vote, Ramos abstained from voting. Hutchinson voted “no.” All other Board members voted to accept the delay.

​Since the vote to delay, community members have been vocal about rejecting any changes to the bill and urging board members to vote yes at the March 24 meeting. On February 26, dozens of Oakland students and community members rallied outside of Board member Sam Davis’ home.

​“You can make the discussion to support it now or we can have civil disobedience later,” said a student through a megaphone at the rally. “We believe it is vital to support The Reparations for Black Students Resolution as written by the community.”

​Davis thanked the students for coming by and told them he would vote “yes” on the resolution and reject amendments on March 24.