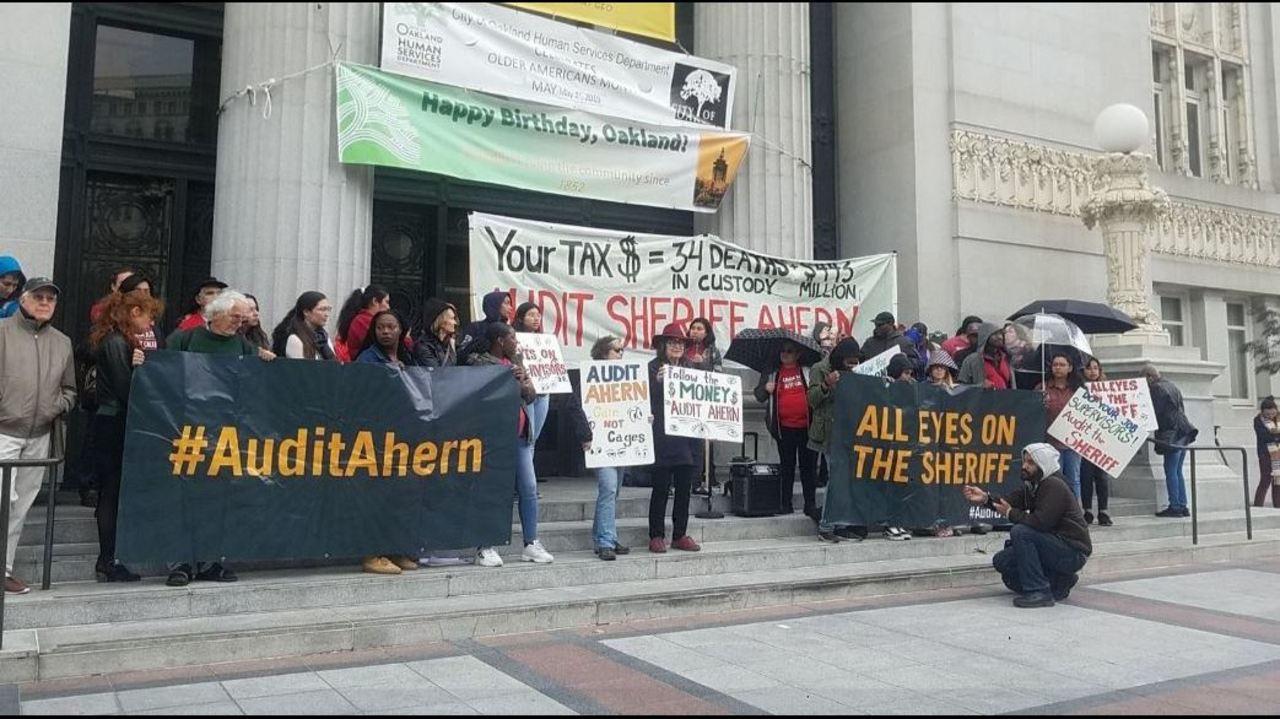 The Alameda County Sheriff’s Office and the County Board of Supervisors are facing a growing furor from Oakland residents and community groups demanding an independent audit of the Sheriff’s Office “in the spirit of justice, transparency and accountability.”

The coalition demanding the audit has gained momentum in the wake of reports of 33 in-custody deaths at the Alameda County jail since 2014, human rights abuses, violations of constitutional rights and “collusion with” with ICE to deport detainees, in violation of the state’s sanctuary law.

The Oakland City Council at its May 21 passed a nonbinding resolution calling on the Board of Supervisors to  authorize the independent audit, which would examine both performance and financial issues. The resolution was authored by Councilmember Nikki Fortunato-Bas, backed by Mayor Libby Schaaf and Councilmember Dan Kalb.

Adding her voice to the public outcry, State Senator Nancy Skinner recently sent a letter to the Board of Supervisors President Richard Valle calling for the audit in response to the “troubling reports” released by organizations such as Ella Baker Center for Human rights.

In her letter, Skinner pointed out that the Sheriff Office’s budget has increased by $144 million over the past 10 years, reaching $443 million this year, even though the inmate population has decreased by half, as a result in changes in criminal justice legislation.

Speaking at the City Council’s Public Safety Committee meeting on May 14, Councilmember Fortunato-Bas said she authored the city resolution because “I was deeply concerned … when community groups and families shared their stories of human rights abuses right here in Alameda County.”

“We as a city can’t stand idle as our most vulnerable residents are cruelly and severely punished with a broken criminal justice system,” said Fortunato-Bas. At a time when the city is experiencing growth and development, it should be investing in schools, parks, infrastructure, public health and affordable housing and “not continue fueling the prison pipeline and mass incarceration,” she said.

Cathy Leonard of the Coalition for Police Accountability told councilmembers that the Sheriff’s Office has “been colluding with ICE. They’re letting ICE know when people are being released from jail. That’s against the California sanctuary law.”

Jose Bernal, senior organizer at the Ella Baker Center, said: “We’ve been calling for an audit since November 2017. To most people this is common sense. This is transparency; this is accountability. This has somehow fallen on deaf ears (of) our county officials.”

Though the city resolution is nonbinding and symbolic, Bernal said, “This is a powerful…resolution. This tells the county, the state and the country where Oakland’s values are.”

The San Francisco Chronicle recently reported that a sergeant at the Sheriff’s Office illegally recorded a juvenile arrestee’s discussion with a lawyer.

Last June, “ two in-custody death occurred in Santa Rita (Jail) within the span of just three days,” according to a report submitted by Fortunato-Bas.

“Since 2014, 29 women have come forward with civil suits against (the Sheriff’s Office)…. (including) a pregnant mother who was forced to give birth alone in a dirty cell while guards ignored her screams,” the report said.

Further, according to the report, “In September 2017, four sheriff deputies were arrested on charges of allowing inmates to spray urine and feces on other prisoners at Santa Rita Jail,” citing an article in the East Bay Express.

Last October, the Board of Supervisors in October authorized an audit  by the California State Association of Counties to examine the finances of the Sheriff’s Office.

Supervisor Valle said that after he sees the results of that audit, “then we’ll see if we need to get another audit,” according to a report in the Chronicle.

Sheriff’s spokesman Sgt. Ray Kelly told the Chronicle in an interview that an audit would show that the office is underfunded and understaffed.

“It’s expensive to do law enforcement in Alameda County,” he said, explaining that incarceration costs $75,000 a year per inmate.

Elizabeth Warren at Laney College May 31