OP-ED: Why “green buildings” are a civil rights issue

Opinion: Backers of Shipping Coal to Oakland Mislead the Public 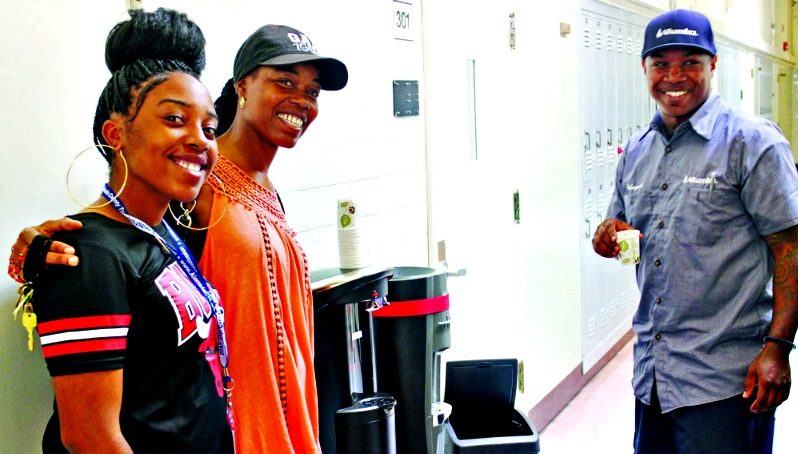 Left to right: Star, a student, parent volunteer Tolani King and John, an Alhambra Water employee, stand next to a new water dispenser that was installed last Friday in the hallway at McClymonds High School. Photo by Ken Epstein.

Though tests found lead in the drinking water at several spots at McClymonds High School in West Oakland, the Oakland Unified School District did little to respond during the last year of the administration of Supt. Antwan Wilson, who left the district early in 2017.

The tests, conducted in August 2016 at the 100-year-old school, found unsafe levels of lead in three places on the campus, including in the showers in the boys’ and girls’ gym. As a result, the district closed the showers, which means the students have not been able to dress for gym for the past year.

But when Ben “Coach” Tapscott, a former Mack teacher and long an advocate for the school, raised an outcry last month, the district responded. He went to the Oakland Post, which published an article about lead in the water in drinking fountains on McClymonds football field. He also went to new district Supt. Kyla Johnson-Trammell, only on the job since July, who took action as soon as she became aware of the situation.

“I immediately called the superintendent’s office and told her that this has been going on for a whole a year,” he said. “She told me, ‘Coach, it will be fixed.´”

In the past few weeks, the district has made a number of immediate but mostly temporary fixes to make sure that students have a plentiful supply of clean water, free of toxic lead and sediments, which –though safe – discolor and cloud the water.

Water faucets by the bleacher area of the football field, which had tested positive for lead, have been fixed. The district replaced the faucets, installed a water filter and ran a new pipe out to the street.

Water in the main school building was found to be lead free but discolored by sediment. All the water faucets have been shut off and covered with plastic. The district contracted with Alhambra Water to place and supply water dispensers on all three floors of the school.
Coach Tapscott said he discovered the water problem when he went to watch Mack´s football team practice before school started.

“(Coach Mike Peters) told me water out there was not safe, and it contained lead. He said he had been going to his mother’s house for a year to fill up water containers, running up her water bill, to make sure the players had safe water.”

Coach Tapscott is outraged that district staff who were responsible for health and safety at the schools allowed students to drink contaminated water for at least a year, and he is determined that the district repair McClymonds to the standards of other schools, not to settle for stop-gap measures.

“Kids have been drinking that water for (at least a year) while people in this district sat on their butts and did nothing for the children,” he said. “Whoever is responsible for this should be fired.”

“They wouldn’t do this in a white school,” Tapscott added.

Tapscott said the district should replace its old galvanized pipes immediately. That would mean hiring a contractor and working weekends to put in new pipes inside and outside of the building.

“You can begin having water in three weeks, digging trenches and crews replacing all the pipes,” he said.  “The main building is a challenge because kids are there, and the crews would have to work on weekends.”

According to the district, replacing the piping throughout the campus is now in the planning stages.  The district estimates that the project will cost about $2.3 million and take a year or more to complete.

In a press statement, Supt. Johnson-Trammell pledged to the community that the district would do what is necessary to fix McClymonds.

“We will keep you, our students, staff, families and other stakeholders, apprised of the process. We will also be engaging the community to ensure that your voices help us determine the best, fastest and most cost effective way to complete these changes for the school.”

Open Letter: Standing with our Dreamers in Uncertain Times