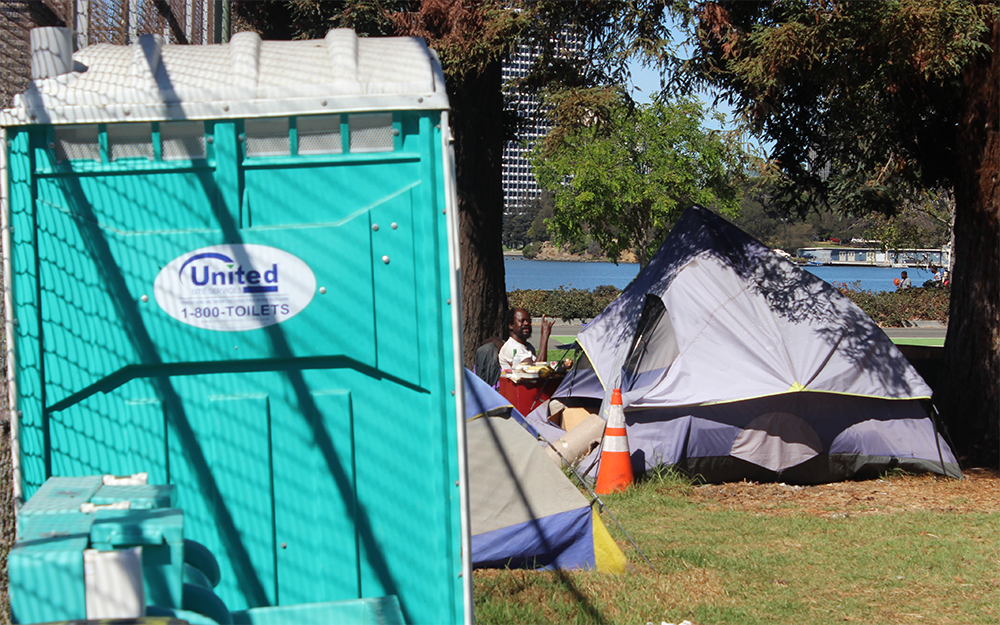 An Oakland native named Funk sits by his tent and behind a city provided toilet. Since he lives within 50 feet of a tennis court, he's in a high-sensitivity area and could face displacement from the neighborhood he grew up in if City Council passes the City Administration's proposed Encampment Management Policy as it currently stands. Photo by Zack Haber on Sept 24.

“In my humble opinion this policy is a step in the right direction, and I welcome the opportunity to strengthen the areas that may fall short in your estimation,” said Dunston during the meeting.

The Encampment Management Policy (EMP) outlined by Dunston and proposed by the City Administration, was largely based off of a report submitted in July that Joe DeVries, the director of Interdepartmental Operations, wrote.

“Encampments located within a high-sensitivity that are not approved by the City Council will be subject to a closure intervention,” reads the EMP.

“These are the high-sensitivity areas that we are recommending. And obviously, it will be up to the City Council to deliberate on these [distances],” said Dunston during the meeting. “Maybe you all decide that some of these distances are too narrow. Maybe you decide they could be expanded in some places.

“Essentially, everywhere else in the city that was just not described…would be become a low-sensitivity area,” said Dunston.

These include hand-washing stations, portable toilets, weekly mobile showers, and waste collection. The waste collection does not include dumpsters and the city currently encourages residents to put their trash in piles.

City Council President Rebecca Kaplan and City Councilmember Dan Kalb both claimed they have heard complaints from residents that many toilets are not being serviced regularly.

Public comments on the EMP were mixed, with some residents supporting and some criticizing it. But homeless advocates, homeless advocate groups, and formerly and current homeless residents criticized it, claiming it expanded the criminalization of homelessness while not offering any new services.

They also criticized how the meeting was set up without including homeless people. While around 60 people gave public comments, only two people currently experiencing homelessness spoke.

Representatives from The Village, Love & Justice in The Streets, The Homeless Advocacy Working Group (HAWG), The Ella Baker Center, The Berkeley Free Clinic, and Shelter Oak all criticized the policy and suggested the LEC should not send the proposal to City Council, essentially asking them to ask the City Administration to create a new EMP.  The Village, HAWG and Shelter Oak also sent e-mails to the city denouncing the current EMP.

“When taking into account all the locations listed as high-sensitivity areas, the policy would leave unhoused residents with effectively zero options as to where they can live without fear of displacement,” said Katie Kelly-Hankin of Love & Justice in The Streets. “Furthermore the policy lacks common-sense action steps to address the human rights crisis in our city, such as providing access to safe cooking facilities, safe electrical outlets, and offering hotel rooms to residents if and when encampments must undergo a deep cleaning.”

Kelly-Hankin asked that the LEC refer to suggestions outlined in an email ShelterOAK wrote to improve the EMP.

The LEC consisting of Kaplan, Kalb, and Councilmembers Lynette Gibson-McElhaney and Loren Taylor unanimously approved sending the proposed EMP to City Council but questioned whether the current low-sensitivity areas would offer enough and appropriate space.

They suggested exploring options for property, including unused county fairgrounds, which unhoused people could possibly live in. Kaplan specifically asked for the City Administration to offer a map of high-sensitivity and low-sensitivity areas to have a clear view of where homeless people could live under the policy.

The EMP is currently set to be brought to City Council on Oct. 20. It will not go into effect unless the council approves it.