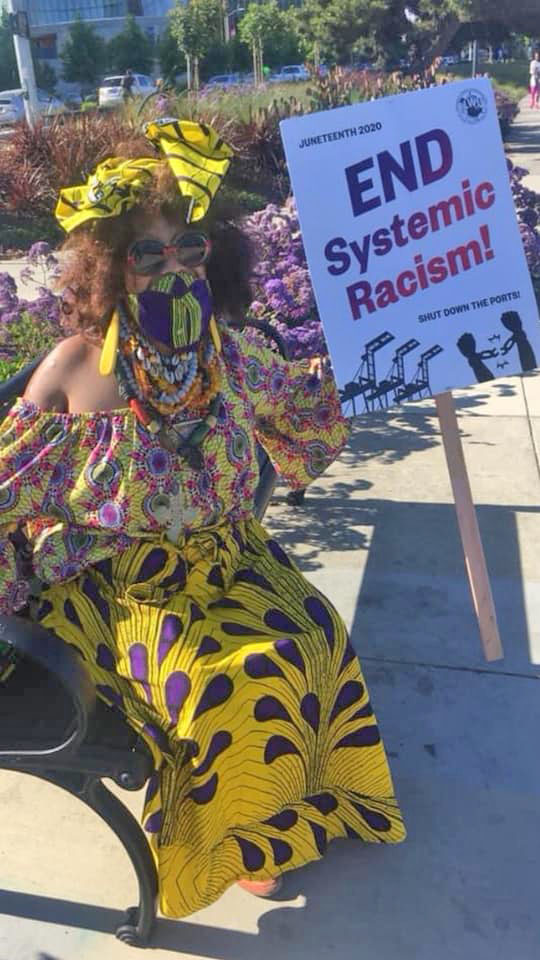 Denise Adele Gums, an innovative organizer and activist around all things related to the African Diaspora, immigrant rights and the rights of indigenous people everywhere, passed away suddenly in Oakland on July 22, 2020. She was 66.

A woman who knew how to have fun while working for systemic change, Gums always knew where the pulse was on any issue.

Her work, grounded in Christ or God consciousness, and honored ancestors, aimed for African Diaspora unity. Gums saw the church as a sanctuary and its role as one of liberation theology.

Her career in community organizing began in the 1970s, according to Melvin Phillips, a neighbor and former classmate. In her role as community liaison for Clergy United of Oakland and the Bay Area Interdenominational Ministry Alliances, Phillips recalls that Gums worked closely with the late Father Jay Matthews, rector of Cathedral of Christ the Light; the late Father Edgar Haasl of St. Louis Bertrand Catholic Church; Rev. Dr. J. Alfred Smith, pastor emeritus of Allen Temple Baptist Church, other Pentecostal clergy and the Black Panther Party for Self-Defense.

She supported immigrant rights and African entrepreneurship. She loved film and volunteered at the Oakland International Film Festival. She worked at the American Red Cross training disaster relief volunteers. More recently she worked as a special education teacher; she loved children, especially those children she taught at Oakland Public Schools and worried about the effects of distance education and the digital divide in the community.

Gerald Lenoir, now a strategy analyst with Othering and Belonging Institute at UC Berkeley, said Gums was a big asset when he founded the Bay Area Alliance for Just Immigration in 2006. A founding member herself, Gums was a bridge between the church and the community bringing her cultural work to bear.

‘Oaktown’ to the core, she always wore colorful wraps, baubles on her wrists and hoops dangling from her ears, even before it was common and fashionable.  She was one of the first to model African-centered face masks as the pandemic unfolded, riding the bus to Berkeley to support an African woman-owned business. She was a ‘Race Woman,’ in the spirit of the Hon. Marcus Mosiah Garvey.

She was involved in political outreach for Africans from the Congo and Nigeria, Ethiopia, Eritrea and the anti-apartheid movement in South Africa in 1980s and 1990s. She was always advocating for the rights of people of African descent in the U.S. and Haiti.

She is survived by her mother, Mrs. Thelma Gums; sisters, Deborah and Karen Gums; aunts and uncle; cousins and too many friends to count. She was preceded in death by her father, Louis Gums and brother Kevan Gums.

Gums is interred at Chapel of the Chimes in Oakland. A public ceremony and celebration of her life was held on Saturday, Aug. 15, 2020, where a City of Oakland resolution declaring it Denise Gums Day was read by Oakland City Councilwoman Lynette Gibson McElhaney.

One of her last acts was to support the people driving and riding in a caravan of vehicles decked out with Black Lives Matter signs in a COVID-19-safe protest that circled Lake Merritt in Oakland. The demonstrations began on June 2, 2020, and will run through Nov. 6, 2020, now in Gums’ honor as well.  The meeting place is Our Lady of Lourdes Catholic Church, 2808 Lakeshore Ave., from 12:00-1:00 p.m. on first and third Fridays. For more information, call 510-255-5579.

If anyone is interested in helping with burial costs, please contact Mr. Osagie A.D. Enabulele, a community leader at 510-393-6262.