'Not a day off.' — Martin Luther King Jr. Day in Oakland
Advertisement 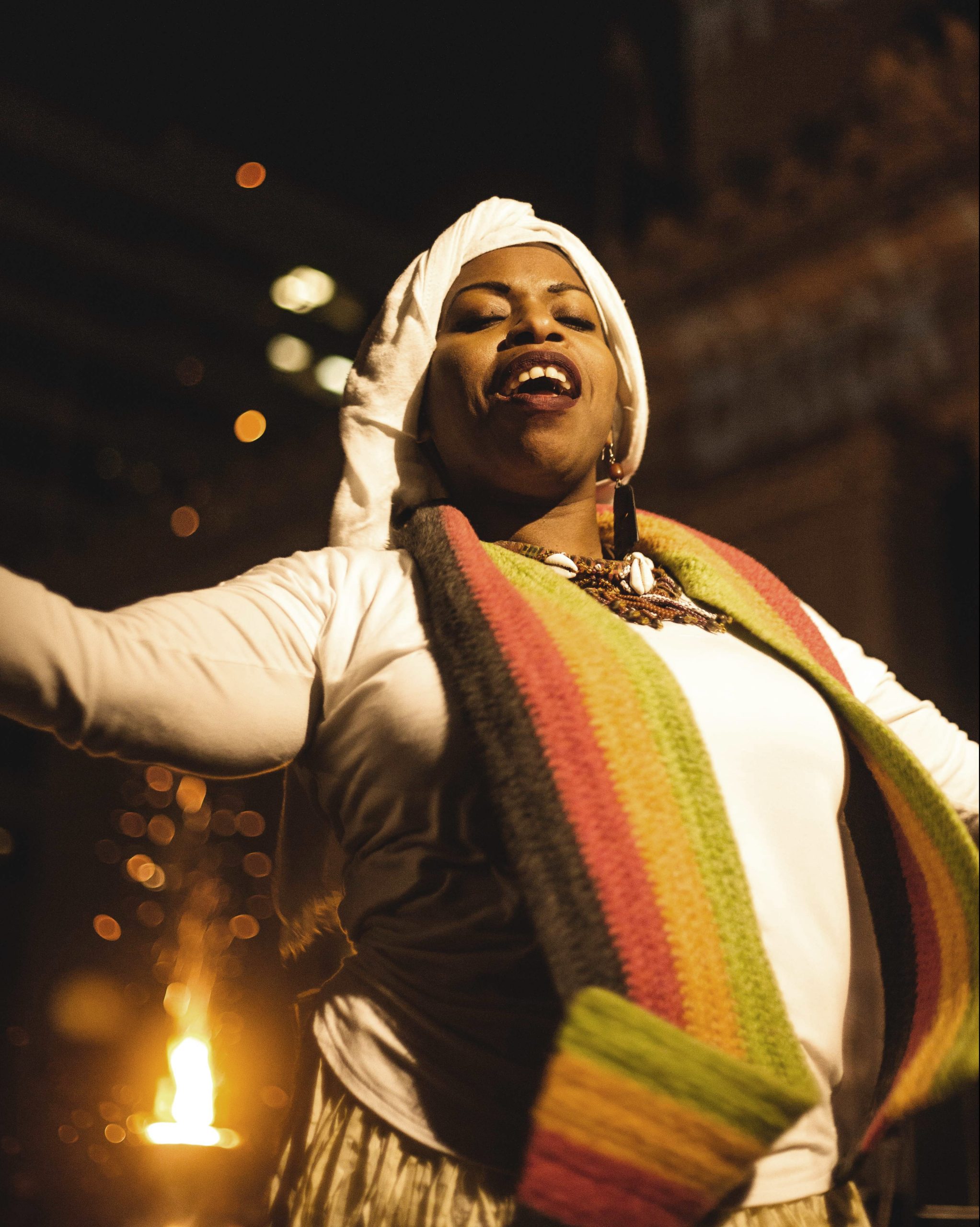 Martin Luther King, Jr.’s birthday is a day off for many—but in Oakland, it’s a day on for service and activism. 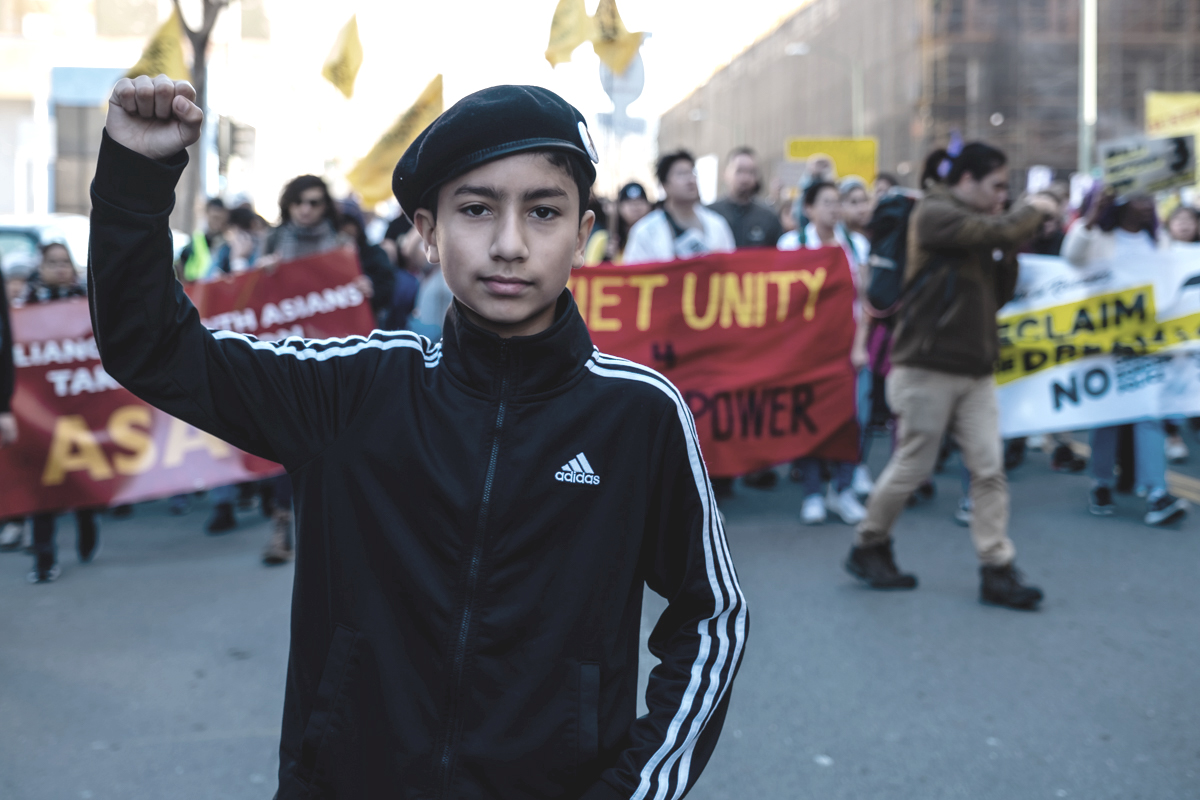 Hundreds took to the streets on what would have been Martin Luther King, Jr.,’s 90th birthday—Monday, Jan. 21.

The event began with a sunrise ceremony, followed by a march through downtown Oakland. Those marching chanted against white supremacy and racism, tying together several issues facing Oaklanders—gentrification, racial profiling, and immigrants’ rights.
APTP held “people’s assemblies” outside City Hall at Frank Ogawa Plaza, occupying the plaza for 10 hours.

This Jan. 1 marked 10 years since the killing of Oscar Grant, a young Black man wrongfully shot by a BART police officer at Fruitvale BART station. His family, and the families of other police-slain young men called for justice.

After the march, Lead to Life, an organization that buys back guns and transforms them into shovels for planting trees, joined protesters at City Hall. They melted guns in the plaza ceremoniously, casting sparks into the air as dancers wielded the shovels—now tools of life—in celebration.

Lead to Life buys back guns “to transform that which ends life into that which sustains life – to facilitate an alchemical healing process that can physically transform both our weapons and our imaginations.” 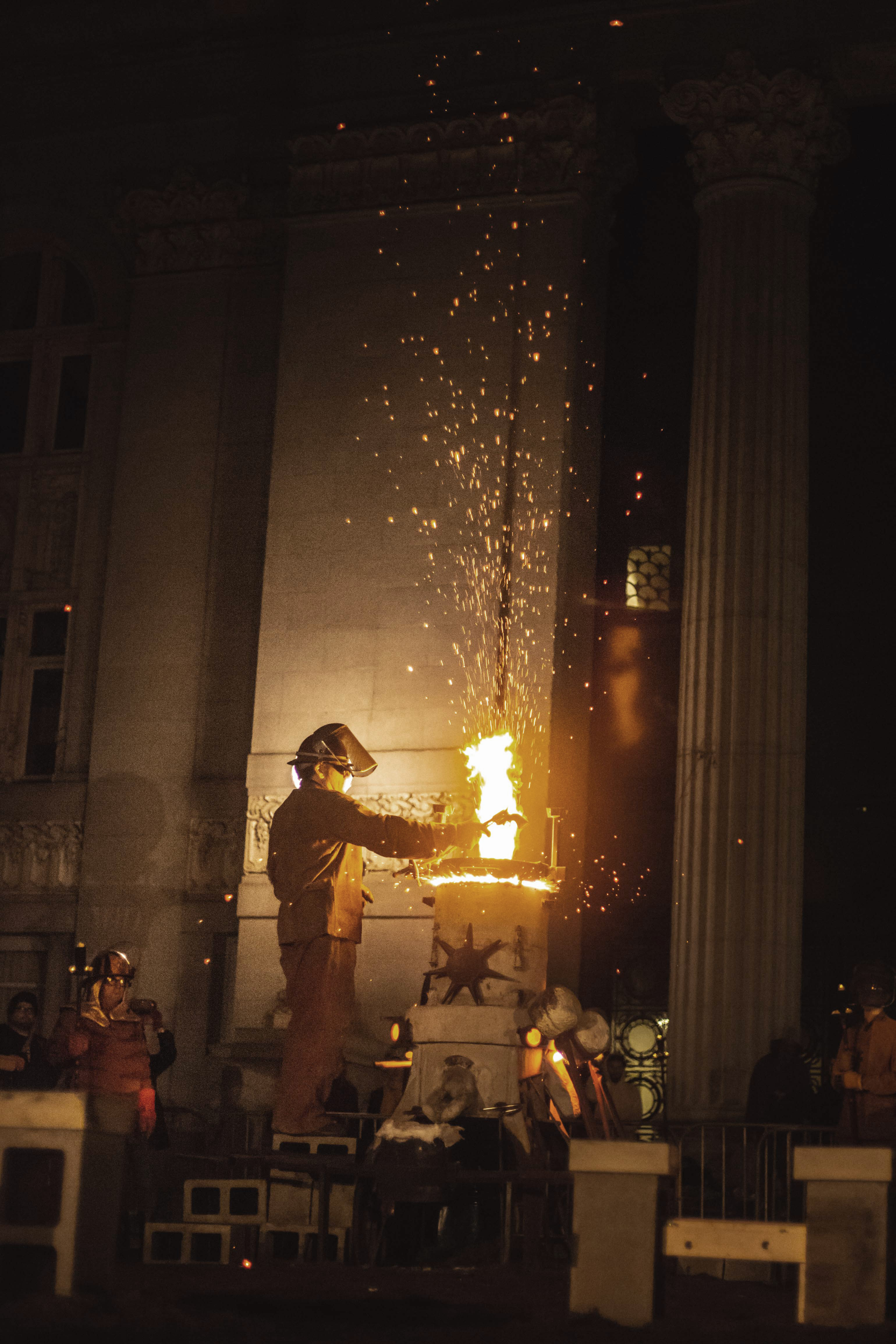 Lead to Life, a local organization, melts gun metal outside the entrance to City Hall on MLK Day turning tools of death into tools of life (shovels for tree planting) on, Monday, Jan. 21. Photo by Saskia Hatvany 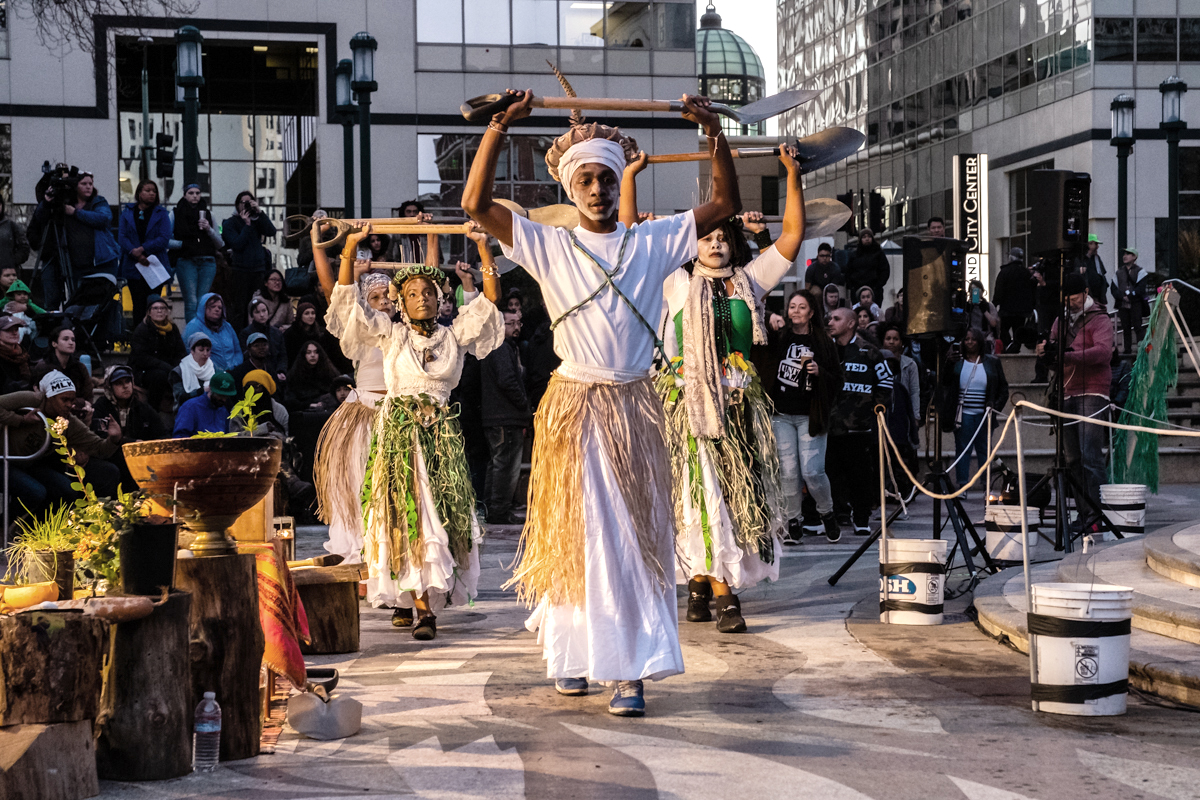 A Day of Service
By Howard Dyckoff

The MLK Day of Service and holiday were celebrated by cleanup and service projects all over Oakland—two in Deep East Oakland. Over 300 volunteers showed up at MLK Shoreline Park and more than 100 volunteers focused on restoring the quality of Arroyo Viejo Park, a stone’s throw from Eastmont Mall.

Over 2,400 volunteers participated at 35 parks and recreation sites throughout the City of Oakland.

Dwayne Atkins, the organizer of the cleanup at Arroyo Viejo and co-founder of We Lead Ours (WELO), has organized volunteer days here for the last several years. “It’s important for folks to come out and to participate because it really brings the community together. It’s great to see so many families and ethnicities here, and I know Brother Dr. Martin Luther King would be smiling today,” Atkins said. 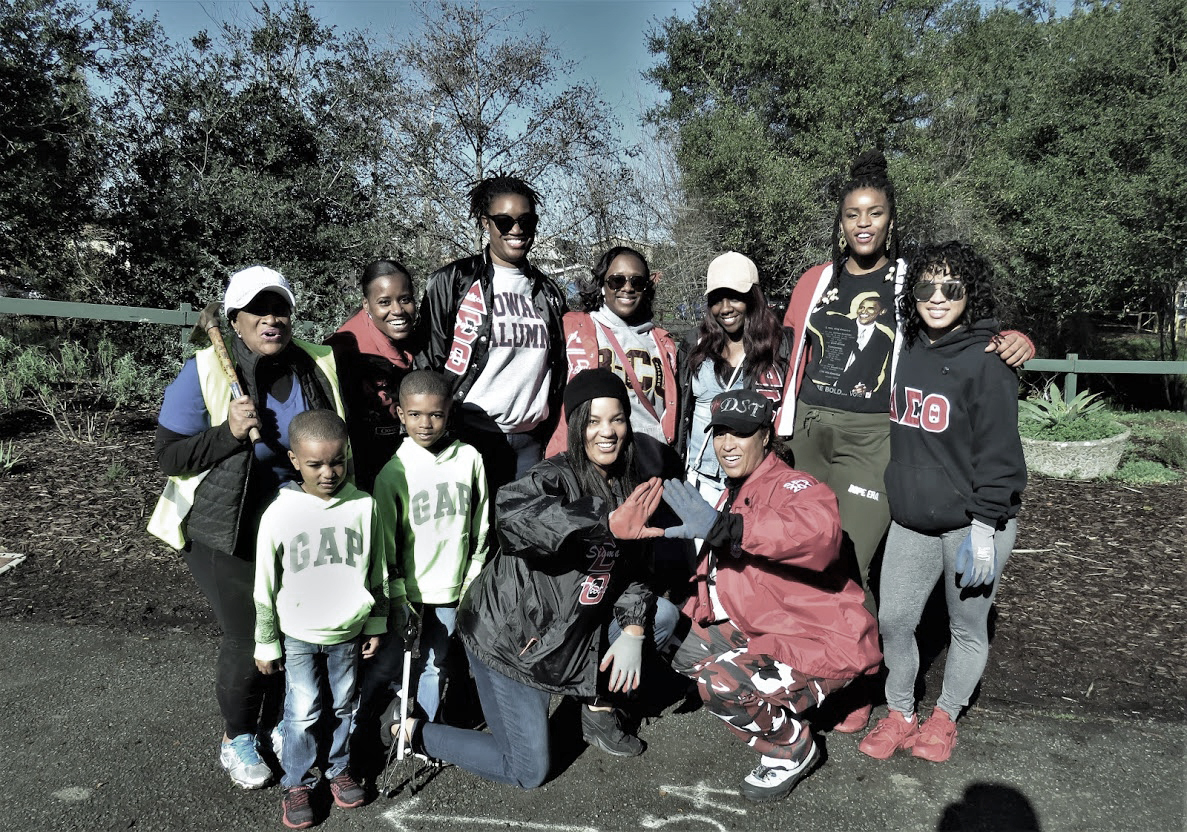 The AST Sorority was among thousands of cleanup volunteers on MLK Day. Photo by Howard Dyckoff

The project at AV included tree planting, mulching, plant pruning, removing debris from the creek, and general cleanup around the park recreation center and park parking lots. Yoon Jae, mother of two daughters, said this event would teach children to improve the environment and also to give back to communities in need. The purpose, she said, is “helping communities and teaching kids to help build a better Oakland, It’s good for them to see with their own eyes the difference we can make.”

At the MLK Shoreline, (accessible from Oakport Drive, near the Coliseum) volunteer efforts were organized by the East Bay Regional Park District (EBRPD), and Save the Bay, a nonprofit organization dedicated to preserving San Francisco Bay.

Park Naturalist Michael Charnofsky spoke with small clusters of volunteers after they registered to explain the effort and the environmental factors behind it. Pollution of the Bay is a regional problem—trash from other cities winds up here on Oakland’s Bay shores.

“Every creek that goes into the Bay is a source of trash,” Charnofsky said. “Most of the trash in the Bay comes from the Sacramento and San Joaquin rivers. We’ve had a lot of high tides with strong winds,” he said, “and that’s blown a lot of trash into the Bay.”

Charnofsky said EBRPD expected over 250 volunteers to attend the cleanup, including families with kids and also industry groups like Kaiser Permanente and Netapp. “Its a good turnout,” he said. 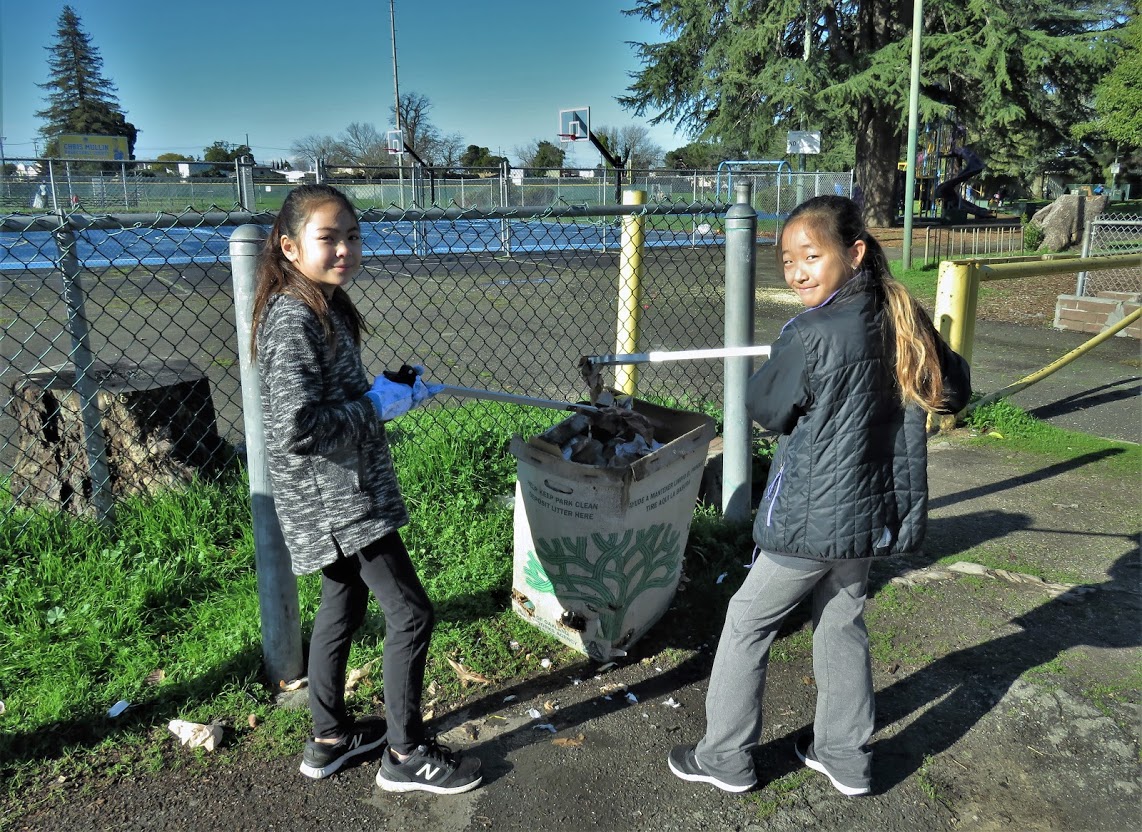 Back at Arroyo Viejo, Atkins explained his personal mission at the park. “This park is very special to me,” he said. “I grew up near this park, I used to come here to play as a child.

When I started my first non-profit, I did my first community day camp here.

“Being on the City Parks Commission, I want to be hands-on, participating in the park. I also want to make it safe for a child to come play…too many young people have lost their lives in this park, walking through at night time. So, I think it’s important for the community to come together on this.”

Congress designated the MLK Day federal holiday as a national day of service in 1994. The MLK Day of Service is intended to empower individuals, strengthen communities and move us closer to Dr. King’s vision of a “Beloved Community.” The day is part of President Obama’s national initiative, United We Serve, which is led by the Corporation for National and Community Service. The initiative was launched by first lady Michelle Obama in 2009 as a way of meeting community needs.

Kamala Harris Is Running For President in 2020