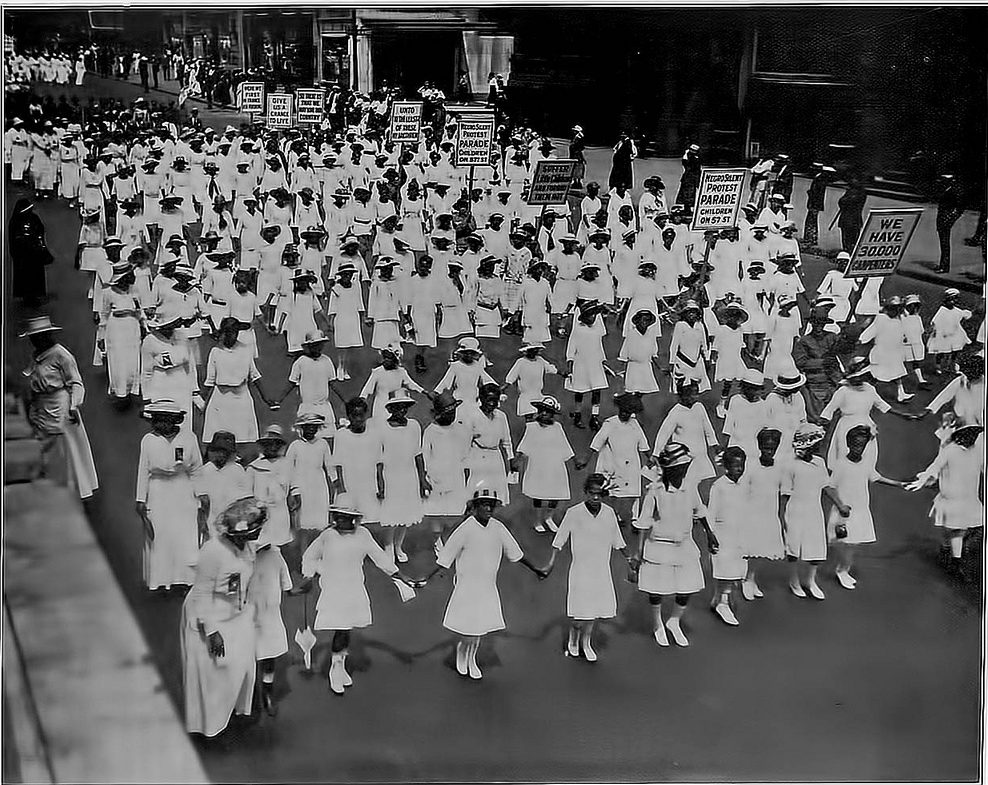 The 1950s and ’60s were the height of the Civil Rights Movement, but it was preceded by decades of direct action and struggle.  The end of the Civil War symbolized the determination to abolish slavery, yet discrimination continued. African Americans, along with support from many of their white colleagues, mobilized and began an unprecedented journey for equality, leveraging movements, boycotts, and marches to elevate their voices. Among these events, the Silent Parade, an anti-lynching protest, served as a significant part of the movement—all without words.

Organized by the NAACP, about 10,000 people gathered in New York City on July 28, 1917, to march in silence down Fifth Avenue to Madison Square.

The event was organized to protest violence directed at African Americans, such as lynchings that had taken place in Waco, Texas, and Memphis, Tenn. The parade was sparked by the East St. Louis riots in May and July of 1917. During this time, about 40 Black people (men, women, and children) were killed by white mobs. The violence, in part, was touched off by a labor dispute where blacks were used for strike breaking.

James Weldon Johnson, the NAACP’s field secretary and the author of “Lift Every Voice and Sing,” also known as the Black (Negro) National Anthem, worked with a group of influential community leaders from St. Philip’s Church in New York City to brainstorm about protesting the riots. The idea of a silent protest had first been suggested by Oswald Garrison Villard during a 1916 NAACP conference.

Black women in New York had also participated in earlier silent parades with white women, such as the June 1917 parade in support of the Red Cross. Villard’s mother, Fanny Garrison Villard, had organized a silent march for suffragettes in New York in 1913.  However, for this protest, organizers felt that it was important that only black people participate because they were the main victims of the recent violence.

Marching in the front were women and children clothed in white, which symbolized innocence in the midst of the country’s racism. In the back were men dressed in dark suits to represent mourning and their willpower to fight for their rights.

Protesters demanded that then-president Woodrow Wilson take action to protect the rights and livelihood of African Americans. They carried signs that read: Thou Shalt Not Kill, Your Hands Are Full of Blood; and Mothers, Do Lynchers Go to Heaven?

During the parade, whites stopped to listen to Blacks explain the reasons for the march; some white bystanders expressed support and sympathy. The parade marked the first, large Black-only protest parade in New York.

The New York Age described the event as a “mute but solemn protest against the atrocities and discrimination practiced against the race in various parts of the country.”

It was hoped that around 10,000 people would be able to participate, and that African Americans in other cities might hold their own parades. The New York City parade was announced ahead of time in other cities as well.

A Letter For Reparations!