The Republican National Committee posted this note on its website two hours before the 9 PM EST debate, which was posted on the social media platform Reddit and went viral:“Americans from all across the country tuned in to watch the one and only Vice Presidential debate. During the debate we helped fact check and monitor the conversation in real time @GOP. The consensus was clear after the dust settled, Mike Pence was the clear winner of the debate…“Mike Pence made the most of his opportunity to debate Hillary’s VP pick Tim Kaine. The other clear winner from tonight’s debate was Donald Trump. His running mate perfectly shared Trump’s vision to make America great again and that message is resonating with Americans all across the country.”During the verbal contest between Kaine and Pence, the representatives of Presidential Candidates Hillary Clinton and Donald Trump, respectively, it was Tim Kaine who went on the attack, taking on Pence and forcing him to address seemingly every racist or sexist statement Trump made on the campaign trail.

<p>By turns, Kaine was more like an auctioneer at Michaan’s Auctions in Alameda, California: haughty, condescending, belligerently beaming – the same could be said for Vice President Joe Biden when he took on Wisconsin Senator and 2012 GOP Vice Presidential Candidate Paul Ryan in their debate. In fact, The Daily Beast said Biden was all of that – “ haughty, condescending, belligerently beaming” – and then declared him the winner that year.

Indeed, Pence seemed off-base and on Twitter a number of observers said that he looked like it and played true to a nick-name he’s gained “Mike Wince.” And when he wasn’t doing that, Governor Pence was constantly saying ‘not true’ in response to one of Kaine’s swiftly-delivered reminders of something ridiculous Trump said or correcting Pence on a statement. For example (from the Washington Post transcript):

QUIJANO: Governor Pence, let me ask you, you have said Donald Trump is, quote, “thoughtful, compassionate, and steady.” Yet 67 percent of voters feel he is a risky choice, and 65 percent feel he does not have the right kind of temperament to be president. Why do so many Americans think Mr. Trump is simply too erratic?
PENCE: Well, let me — let me say first and foremost that, Senator, you and Hillary Clinton would know a lot about an insult- driven campaign. It really is remarkable. At a time when literally, in the wake of Hillary Clinton’s tenure as secretary of state, where she was the architect of the Obama administration’s foreign policy, we see entire portions of the world, particularly the wider Middle East, literally spinning out of control. I mean, the situation we’re watching hour by hour in Syria today is the result of the failed foreign policy and the weak foreign policy that Hillary Clinton helped lead in this administration and create. The newly emboldened — the aggression of Russia, whether it was in Ukraine or now they’re heavy-handed approach…
KAINE: You guys love Russia. You both have said…
PENCE: … their heavy-handed approach.

Now, Pence directed his statement at Senator Kaine, leaving him open to respond, as you can see. That then started a cross-talk between the pair that was, at time, hard to understand because both were realy trying to over-talk each other.

But from Mike Pence’s reactions, it was clear Tim Kaine got under his skin with what at times were withering reminders of Trump’s tax return issue or his view of the poor, and The Indiana Governor’s frustration came out in what has already become a classic moment:

KAINE: Great line from the — great line from the gospel of Matthew. From the fullness of the heart, the mouth speaks.
PENCE: Yeah. KAINE: When Donald Trump says women should be punished or Mexicans are rapists and criminals…
PENCE: I’m telling you…
KAINE: … or John McCain is not a hero, he is showing you who he is.
PENCE: Senator, you’ve whipped out that Mexican thing again. He — look…
KAINE: Can you defend it?

The Mainstream Media Followed The GOP and Called It For Pence

A CNN / ORC Poll immediately conducted after the debate called it 48 percent for Pence and 42 percent for Trump. But Tommy Ates at The Daily Kos observes the CNN / ORC Polling focuses on mostly-white most-likely voters and with 50 percent of them using landlines whereas 64 percent of Americans use cell-phones, and there’s no poll tracking for voters under 50, the overall result is a conservative outcome.

This outcome is then repeated across mainstream media and without an explanation of the poll’s bias. So, the American viewing public is basically tricked into thinking Pence won, when the fact is Kayne clobbered him in the fact-check department – the common way one determines who won a debate.

From this, it seems there’s an effort within mainstream media to make the Presidential race seem closer than it really is. Speculatively, this could be a ploy for ratings – after all, why bother paying attention if you know one candidate’s going to clobber the other on Election Day? If so, it’s still a terrible way to try and manufacture consent. The only answer is more social media outlets that work to gather the true voice of the people and tell the truth – in this case about the 2016 Vice Presidential Debate.

Op-Ed: Civilians Should Oversee the Police

Jerry Brown was mayor of Oakland in 2003 when the Oakland Police Department was put under the supervision of federal Judge Thelton Henderson as fallout from the “Riders” scandal.

Michelle Obama gave a scorching speech about Donald Trump’s recently uncovered videos, which show him admitting to sexually abusing women. The following is the transcript from Obama’s speech at a rally at Southern New Hampshire University on Thursday:

Campaign finance statements of Oakland City Council candidates were officially released last week, revealing large unpaid expenses in at least one campaign and heavy contributions by real estate developers and the police union in others. END_OF_DOCUMENT_TOKEN_TO_BE_REPLACED 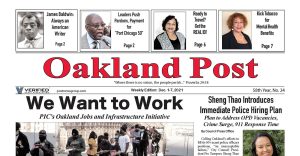