Recognizing the importance of the Black vote and the reach of the Black Press of America, Democratic Presidential Candidate Mike Bloomberg has just delivered the largest single advertising buy to the Black Press in the 80-year history of the National Newspaper Publishers Association (NNPA).

The NNPA is the national trade association that represents 230 black-owned newspapers and media companies throughout the nation.

The $3.5 million ad buy became official on Monday, Feb. 10, 2020, during Black History Month. It enables Bloomberg to continue his aggressive campaign for president with ads appearing in Black Press of America publications throughout the upcoming Super Tuesday states, as well as other key states where the Black vote will be the determinative factor in the Democratic Party primaries.

Benjamin added that the ad agreement counts as a recognition that, while some people only talk about accomplishing important initiatives, Bloomberg follows through. “Mike has a history and a record as mayor, CEO, and philanthropist, of getting things done,” Benjamin stated. “The ad buy not only is a show of respect to the incredible impact and importance of African American journalism but also it is Mike walking the walk when it comes to his investing in African American-owned businesses.” 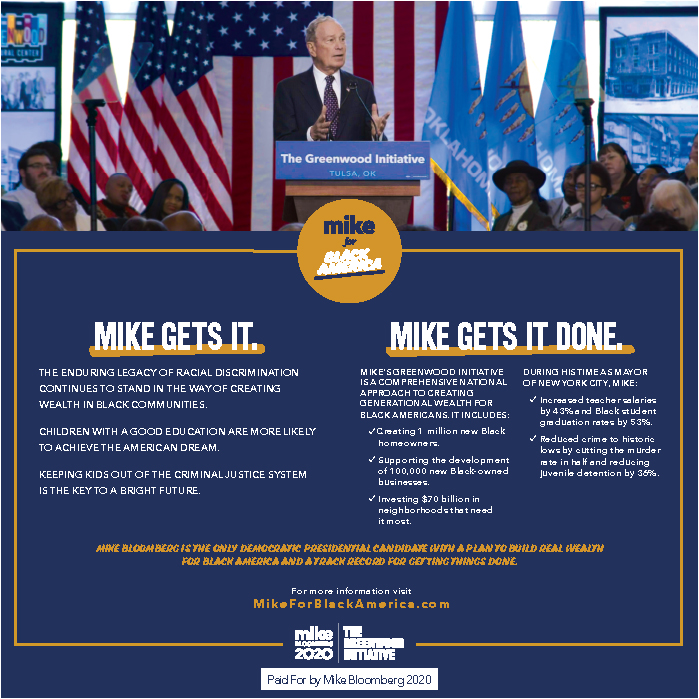 “The ad buy not only is a show of respect to the incredible impact and importance of African American journalism but also it is Mike walking the walk when it comes to his investing in African American-owned businesses,” said South Carolina Mayor Steve Benjamin, who co-chairs Bloomberg’s campaign.

Steven N. Larkin, the NNPA advertising salesman who helped in negotiations with Bloomberg’s campaign, called the ad buy a “Historic partnership between Mike Bloomberg and the Black Press.”

Reaching Black America in 2020 is critical for all presidential candidates, according to the Brookings Institute, a nonprofit public policy organization in Washington, D.C.

In a recent study, researchers at Brookings noted that candidates increase their chances of winning the presidency by “taking the long-range approach of energizing Black voters. Both parties should not discount the powerful recent election results in which Black votes determined the outcome.”

Dr. Benjamin F. Chavis Jr., the president and CEO of the NNPA, NNPA, emphasized, “It is appropriate and politically providential that candidates for the highest office in the nation recognize and sustain the significance of reaching African American voters through the Black Press of America via the NNPA. Mike Bloomberg has now stepped up to the plate with the commitment of his resources at this pivotal moment in history to affirm the importance of the Black vote in 2020.”