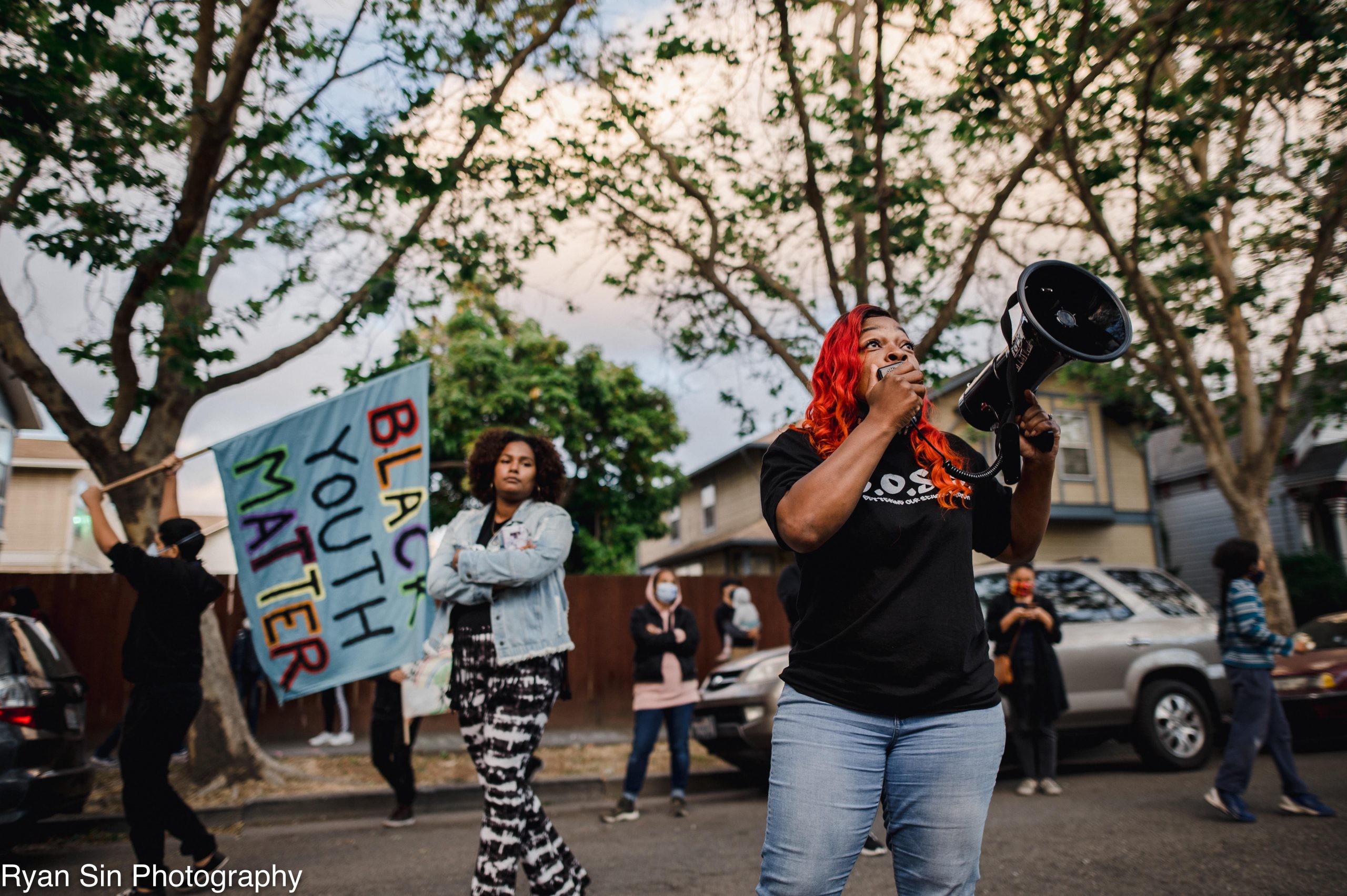 BOP Director of Organizing, Jessica Black (front), and BOP member leader Desiree Mims (back) at a protest outside of school board member Jumoke Hinton Hodge's home in West Oakland on Fri., June 5. Photo by Ryan Sin, courtesy of BOP.

Black Organizing Project (BOP) could reach a goal on June 24 that they have worked toward since 2011: eliminating school police in Oakland’s Unified School District (OUSD), the only district in Alameda County with its own police force.

They are calling on Oakland residents to help them in their final push.

“What is it going to take for this school district to realize the murders [by police] that we are witnessing of our people in the streets are the same police who are in the schools?” asked BOP Director of organizing, Jessica Black, speaking to uproarious cheers from a crowd of around 8,000 at an Oakland protest against policing and a city and county imposed a curfew on June 3.

Black then said just three months earlier, on March 3, Oakland’s school board rejected a measure by one vote that would have drastically cut Oakland Schools Police Department’s (OSPD) budget.

BOP is now calling on Oaklanders to call, e-mail, and write letters to school board members, especially the four who voted against the previous measure and OUSD Superintendent Kyla Johnson-Trammell, before the final school board meeting on June 24 to demand that they approve a new, more radical measure submitted by Torres and Gonzales called George Floyd Resolution to Eliminate OSPD.

“We can’t let off pressure,” said BOP Executive Director Jackie Byers. “We need those votes. And then on the 24th…[we need people] to get on the Zoom meeting, make public comments or speak to the agenda item.”

Readers can also submit comments during the school board meeting today, June 10.

Torres, who co-wrote the resolution, suggests people should sign up at 5:30 p.m. for public comment and then can watch the meeting or log off till 7:30 p.m. when comments can be heard. 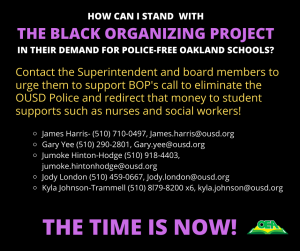 She says readers can sign up again at 5:30 p.m. on June 24 to speak at 7:30 p.m. for public comment, but they will also have the ability to speak directly to the agenda item that night.

It is unclear at this point when that agenda item will come up, but readers can link with BOP’s Facebook, Twitter or Instagram accounts for the latest info on how to help.

The bill would eliminate OSPD, removing police officers entirely from Oakland schools. It would be the culmination of a nearly decade-long battle that was sparked by the killing of Raheim Brown, Jr. on Jan 22, 2011, by OSPD Sgt. Barhim Bhatt outside of a school dance at Skyline High School. Bhatt claimed he shot Brown five times because Brown attacked another sergeant at the scene, Johnathan Bellusa, with a screwdriver. But Bellusa later claimed Bhatt may have fired unnecessarily and that OUSD prevented a proper investigation.

All of these employees serve under Police Chief Jeff Godown, an officer who served in Los Angeles during the Rodney King riots.

SSOs have some documented history of use-of-force on minors.

In 2014, there were two separate incidents caught on camera. At Oakland High School an SSO punched a student four times who uses a wheelchair and has cerebral palsy after an altercation over the student possibly skipping class. The SSO was later convicted on one felony count of assault.

SSO officers in Fremont High School put another 15-year-old student in a chokehold, dragged him, and exchanged punches with him.

But BOP says overt acts of violence are not the only threat to students that police systems in schools pose.

Black students, especially, experience more subtle forms of damage from the punitive system that police-based models foster. While suspension rates for Black students have fallen in recent years, they still get suspended at a rate about three times higher than non-Black students.

“Black students aren’t seen in the way that white children are,”  said Byers. “They’re seen as a threat from a very early age.”

“Our students don’t feel safe when they’re around law enforcement in the way white students might feel safe,’ she said. “[They’re] constantly barraged with a reality and imagery of law enforcement murdering Black people, including young people…those images are in the psyche of Black students.”

Byers also said many Black students who live in public housing and use public transportation more often than white students are forced to interact with law enforcement constantly, as both BART and the public housing authority have their own police force.

When police are in schools as well, it becomes yet another site of trauma.

“Counselors and therapists won’t have to rely on security to react to adolescent behavior,” said Williams.

SSOs would be retrained and transformed into peacekeepers, or school climate specialists. They would no longer wear uniforms. They have never been armed and they would continue not to be armed.

Williams said she’s heard reports from principals, teachers and students that some current SSOs have positive relationships with students and act as mentions. But the structure is not in place to encourage those relationships in a widespread way.

“If you say these people can act as mentors let’s support that and not create a punitive model,” said Williams.

Black Rage is Justified – Statement from the Brotherhood of Elders Network