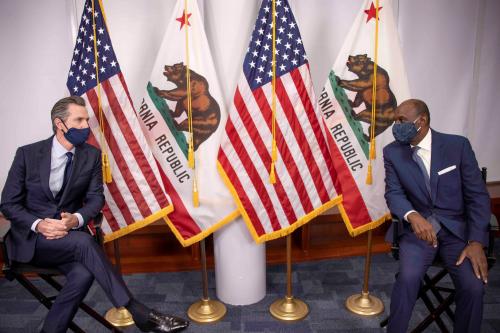 On Monday, Gov. Gavin Newsom nominated Martin Jenkins, a San Francisco native, and a former prosecutor and judge, to the California Supreme Court. If confirmed, Jenkins, 66, would be the third African American to serve on the state’s highest court.

The governor nominated Jenkins, who his peers describe as a moderate Democrat, to replace Justice Ming W. Chen, a Republican Gov. Pete Wilson appointed in 1996. Chen retired in August.

“I am more excited about Martin Jenkins’ appointment than I was for my own,” said Judge Teri L. Jackson, who was appointed by Newsom last year as associate justice of the First District Court of Appeal, Division 3, in San Francisco. Jackson, who also grew up in San Francisco, has known Jenkins most of her life.

“I feel so lucky to have always had him as an older brother, mentor, confidante and friend. Now, the whole state of California will be lucky to have him — we all can experience his brilliance together, his commitment to justice, his sense of fairness and his collegial style. He always tries to seek common ground and the common good,” she said. “He will bring practical and intellectual analysis to our Supreme Court. And it will come with compassion, courage and dedication.”

“Justice Jenkins is widely respected among lawyers and jurists, active in his Oakland community and his faith, and is a decent man to his core,” Newsom said in a statement. “As a critical member of my senior leadership team, I’ve seen firsthand that Justice Jenkins possesses brilliance and humility in equal measure. The people of California could not ask for a better jurist or kinder person to take on this important responsibility.”

Jenkins currently serves as  Newsom’s judicial appointments secretary. In that role, Jenkins, who would be the first openly gay man to serve on the California Supreme Court, worked with Regional Judicial Advisory Selection Committees to help the governor nominate 45 judges across the state from diverse backgrounds.

On Monday, Jenkins reacted to the news of his appointment.

“I am truly humbled and honored to be asked by the governor to continue serving the people of California on the Supreme Court,” Jenkins said following the governor’s announcement. “If confirmed, I will serve with the highest ethical standards that have guided me throughout my career, informed by the law and what I understand to be fair and just.”

Jenkins began his legal career as a prosecutor for the Alameda County District Attorney’s office. After that, he held several positions in public and private practice, including trial attorney for Pacific Bell’s legal department in San Francisco; an attorney appointed by former Pres. Ronald Reagan with the Civil Rights Division of the Dept. of Justice; and judgeships on the Oakland Municipal Court and the Alameda County Superior Court.

Before accepting his current role in the governor’s office, Jenkins served as an associate justice on the California Court of Appeal, First Appellate District, from 2008 to 2019. Before that, he was a federal judge for the U.S. District Court for the Northern District. President Bill Clinton appointed him to that position.

Jenkins completed his undergraduate degree at Santa Clara University and earned his Juris Doctor at the University of San Francisco School of Law. After college, he signed a contract to play in the NFL as a cornerback for the Seattle Seahawks, but he decided to go to law school instead.

Jenkins, a devout Catholic, says he remembers working with his father as a kid cleaning offices and churches around San Francisco for extra money.  His father was a custodian and clerk at Coit Tower, a historical landmark in San Francisco. His mother was a nurse.

The other two African American justices who have served on the California Supreme Court are Justice Leondra Reid Kruger, who former Gov. Jerry Brown appointed in 2014, and Justice Wiley William Manuel, who Brown also appointed in 1977 during his first term.

Jenkins’ nomination is pending approval by the State Bar’s Commission on Judicial Nominees and confirmation by the Commission on Judicial Appointments. The members of that commission are California Chief Justice Tani Cantil-Sakauye, Attorney General Xavier Becerra and Senior Presiding Justice of the state Court of Appeal J. Anthony Kline.

As a Supreme Court Justice, Jenkins would earn an annual salary of $261,949.