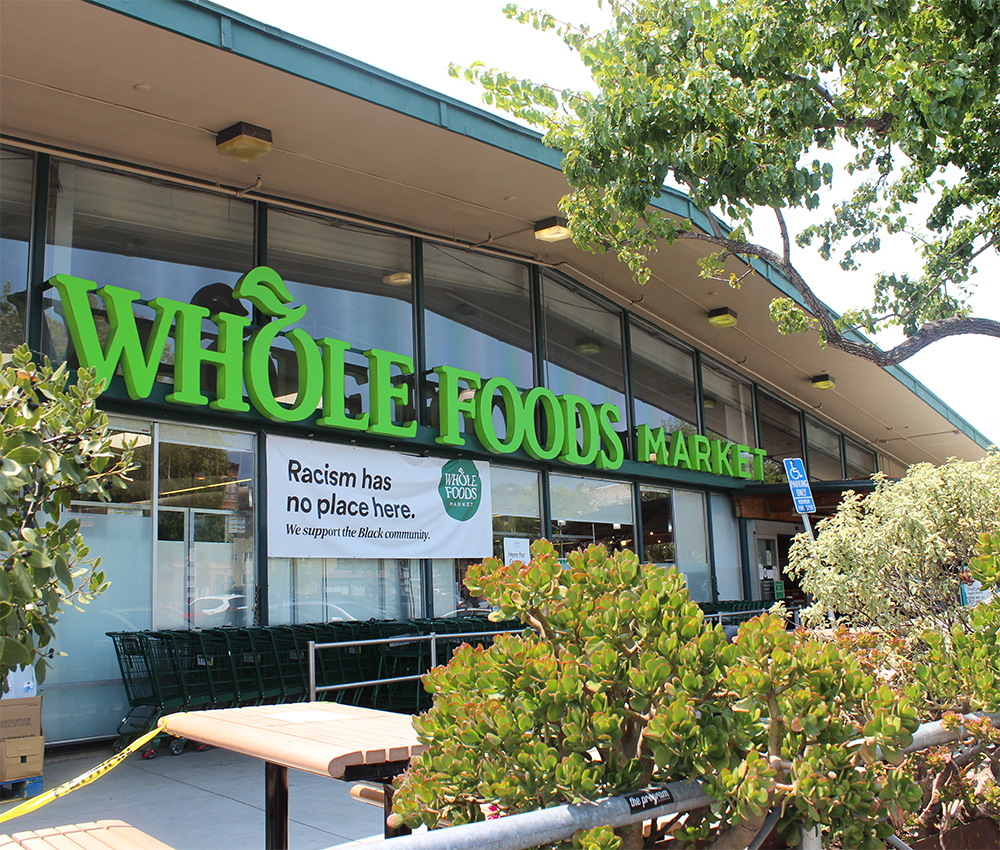 Workers at Berkeley’s Whole Foods grocery store on Telegraph Avenue have expressed concerns for their safety and are claiming inadequate clean-up and dissemination of information. Five workers have tested positive for COVID-19 in the store since June 2.

All workers quoted in this article requested to speak under pseudonyms, as they said they fear retaliation from Whole Foods that could put their employment at risk. Since a fifth case was reported just before this story went to press, their quotes and comments reflect on just the first four cases.

“Personally I don’t feel safe,” said Kendal Galkins, a worker at the location who claims the store was cleaned after she was informed of the first COVID-19 case, but was not cleaned after the second, third, and fourth cases.

Galkins said that store team leader Kelly Fox told staff that clean-up after the second, third and fourth confirmed cases was unnecessary because, in each case, by the time Whole Foods could confirm the workers tested positive for COVID-19, the infected workers had been absent for long enough that any virus that could have been present in the store would have died off.

When questioned, Fox said she would not comment on this story and referred all inquiries to the Whole Foods media team.

Galkins said although Whole Foods maintenance cleaned up at night after the first case, she views that clean-up as insufficient as it was done by Whole Foods staff.

“It’s different if you have hired somebody like a third [party] who has a job to clean up especially for COVID-19,” said Galkins.

A Whole Foods spokesperson, Rachel Malish, said a third party cleaning service did come in after the first confirmed case, countering Galkins claim, but neglected to mention the name of the cleaner when directly asked and did not comment on clean-up efforts after the other confirmed cases.

“That is unbelievable,” said Galkins. “There have been four cases and only one store clean-up.”

Randy Silks said Fox had told workers they could expect a multi-day cleaning process if a worker tested positive that would involve the store closing, but that Whole Foods “went back on their word,” as the store was never closed for any amount of time after positive cases were announced.

Silks said he thought keeping the store open meant it would not have to lose any money and complained that Whole Foods was sacrificing worker health and well-being to increase their profit.

Although workers had been receiving a $2 per hour increase in pay from their regular salaries, a virus-related hazard pay allotment, workers at Whole Foods lost their hazard pay on June 1.

The decision to cut hazard pay came at the national level and was not a local decision. Still, the timing of how it played out at the Telegraph store specifically has frustrated Silks since June 2, the second day of his non-hazard pay work, when he learned of his first co-worker testing positive, making it clear to him that the virus was still an issue.

Malish confirmed that workers lost their hazard pay starting on June 1 but did not answer direct questions as to why it was canceled as COVID-19 cases continue to rise nationwide. She referred to a one-time bonus for workers in June that Amazon, the company that owns Whole Foods, announced.

Telegraph Whole Foods workers have claimed that they do not feel they have been informed in a timely manner about COVID-19 risks.

They report that co-workers informed Fox they were taking time off because they were showing symptoms and/or live in the same household as people who have tested positive for COVID-19, but Fox did not share that information with other workers.

They said the Whole Foods service that relays texts to workers about COVID-19 has only shared information after a worker has tested positive.

“When they know that a person is out because they might have it, they don’t tell us,” said Chris Cartison, another Whole Foods worker. “They wait till they get a positive result.”

Malish said that after presumed or confirmed diagnosis, “we activate a set plan to protect the privacy of the impacted person while also mitigating any potential risks,” and that the plan, “includes contact tracing and a formal notification process for those working in our stores.”

The formal notification process, according to Malish, is done through in-store team meetings and an auto-call text system.

Galkins said she heard in the store from co-workers on June 10 that there had been a positive case but the texting service did not inform her until the next day, June 11.

She did not understand why she had to learn about it from her co-workers and was not informed immediately by Fox or the Whole Foods texting service.

When asked about contact tracing, Galkins said she did not knowingly participate in it but heard, “talk about doing it through cameras in the store.”

Cartison expressed that if one person likely had COVID while working in the store, everyone was at risk.

Silks said that during a small meeting of workers lead by an assistant team leader on June 10, he learned of a positive case and that the worker had been out since June 3. He did not understand why the store was not cleaned on June 3 if Whole Foods knew of the risk.

The positive case that was confirmed through text on July 11 was one of three confirmed cases in a short period of time. Another was confirmed on July 7. Vince Chase, another worker, questioned why information related to that worker testing positive for COVID-19 was released directly after the July 4 weekend. On July 15, Whole Foods texted workers to confirm a fifth positive COVID-19 case.

Silk said the store provides workers with masks and a place to eat indoors where workers are spaced to meet social distancing guidelines, but he wishes staff was forced to eat outdoors.

Malish pointed out, and workers confirmed, that in addition to masks, Whole Foods uses plexiglass barriers at checkout counters and requires temperature checks before all workers report to work. She also said Whole Foods has, “enhanced daily cleanliness and disinfection protocols in all of our stores.”

The four workers interviewed for this article said they want the store to be cleaned by a third party after every COVID-19 case and want more transparency about COVID-19 risks.

Jennifer Altman, a mother of two who lives near Telegraph Whole Foods and shops there regularly, also wants more transparency in terms of possible COVID-19 risks at the store for customers. She was only aware of one positive COVID-19 case until being interviewed for this new story.

Claiming that shopping for food is one of the most dangerous activities people engage in under COVID-19, she said, “I think it’s really important that people know what’s happening in a grocery store so they can do their own risk management.”