It’s a sign of the times. Marijuana, which has been illegal in so many places for so long, is about to go legit in the United Kingdom. Anyone who’s been dealing dope in the shadows can come into the light.

That’s the position American expat Mickey Pearson (Matthew McConaughey) finds himself in. He’s been the ghost boss of a thriving reefer empire in London, England, his new home. Thugs, growers and dealers report to him. Weed liberation is just around the corner, and he’s fully prepared to profit in what is likely be a very lucrative industry. 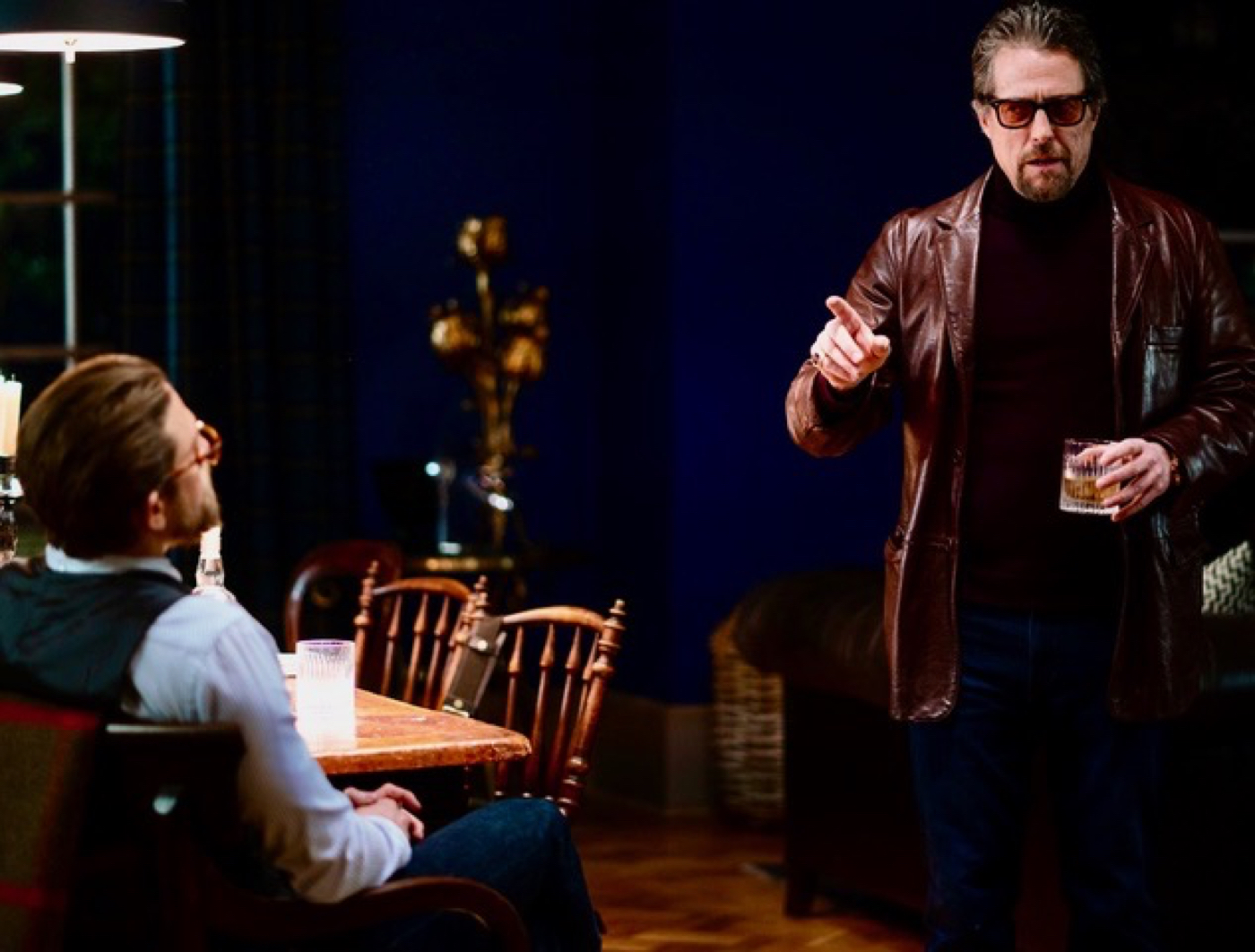 The dude knows he’s large and in charge. And the saying goes: “If you want to be the king of the jungle, you must act like the king of the jungle.” He’s wise enough to be shopping his business around to the highest bidder. He cultivates a gay, cunning and filthy rich billionaire buyer named Matthew (Jeremy Strong, The Big Short), who seizes on business opportunities. Mickey, his wife Rosalind (Michelle Dockery, Downton Abbey), righthand man Ray (Charlie Hunnam, TV’s Sons of Anarchy) and a protective thug named Bunny (Chidi Ajufo, The Widow) are setting themselves up for a big pay day.

Various scoundrels are just as determined to undermine, rob or murder them: There’s Dry Eye (Henry Golding, Crazy Rich Asians) and his crew of saboteurs. The Coach (Colin Farrell, In Burges) and his adolescent gang. The Asian crook Lord George (Tom Wu, Fast & Furious Presents: Hobbs & Shaw). They all fit into the mix. Hands down the most duplicitous one in the bunch is that snooping bugger private investigator Fletcher (Hugh Grant, Four Weddings and a Funeral). He’s never met anyone he couldn’t swindle or blackmail. Drugs, money, loaded guns. What could go wrong? 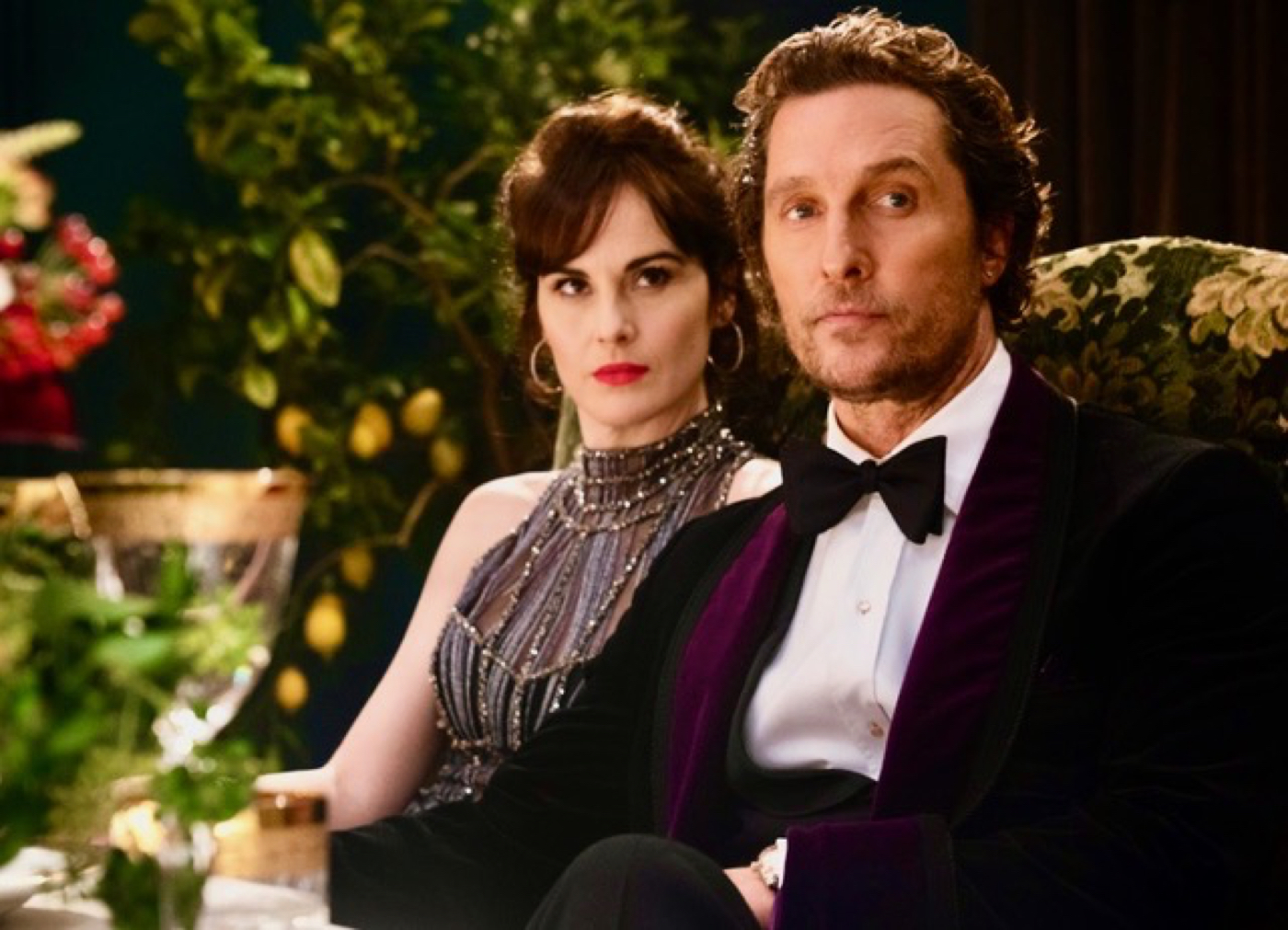 Michelle Dockery and Matthew McConaughey in “The Gentlemen.”

Writer/director Guy Ritchie, a former video/commercial director turned filmmaker, made his big splash feature film debut with the very clever crime movie Lock, Stock and Two Smoking Barrels. He coined a style of staccato crime/thriller moviemaking that is dense, filled with characters, laden with cheeky graphic language, sexy, often ultra-violent and cast with teams of multicultural British actors. Snatch and RocknRolla followed this pattern. Sherlock Holmes and Aladdin did not. The Gentlemen is an imperfect return to form. As Ritchie wipes away the cobwebs on his signature writing/directing style, he misses a few ingredients—especially breakneck pacing.

The script uses an overabundance of voiceovers and conversations and too many onscreen narrations by Fletcher. Though Hugh Grant is completely charming, he runs his mouth way too much. His recollections are realized in flashbacks, where there is double-dealing, death and betrayals. There’s some of that in the present too. Deciphering it all is like peeling layers off an onion that smells more intensely as you get to the core.

The difference between this clunky piece of storytelling and Lock… or Snatch is that you’re frustrated during the process and not always gleeful. There are lots of stagnant scenes where the pacing (editor James Herbert, Aladdin) grinds to a halt and will test your patience. That’s when your eyes focus on the way too obvious sets (production designer Gemma Jackson and set decorator Sara Whittle) and the neatly pressed clothes (Michael Wilkinson, American Hustle) that look so new you’ll think they’ve still got price tags on them.

Colin Farrell and Charlie Hunnam in “The Gentlemen.”

The wordy script may be a problem, less for adult viewers, more for casual action/thriller fans. But Ritchie’s overall direction of the action scenes, dramatic moments, murders, and swindling is not. In fact, even though he is not at the peak of his game, his style and swagger is still ultra-cool. The cinematographer (Alan Stewart, Aladdin) has a good eye for composition and lighting. The visuals, coupled with a very fun musical score (Christopher Benstead, Gravity) and toe-thumping playlist give the film a rebellious spirit that carries it to the finish line.

Most of the cast looks like they just stepped out of a GQ photo shoot. McConaughey has an air about him that is even more imperialistic than British royalty. Hunnam as Ray is like a hamster in a cage finding out that he’s being played. Strong is suitably sneaky as the buyer. Farrell brings a touch of dry humor to the Coach. Golding, Wu and Ajufo are fun to watch.

But hats off to Grant as the scene stealer. He does whatever he has to do to make Fletcher look like complete scum. If anything, the dazzling Michelle Dockery is not in enough scenes and ditto for the other few actresses who don’t get enough screen time. This is a boy’s club movie.

Time marches on. That youthful swagger that formally burned through Guy Ritchie’s creative soul has matured. So has his selection of actors. Come for the fun of it, sit through the cumbersome storytelling, find a way to enjoy the puzzling antics and you may experience the heady joy of this gangsta caper.

COMMENTARY: The Values Of A King: “Dr. King was Relentless’