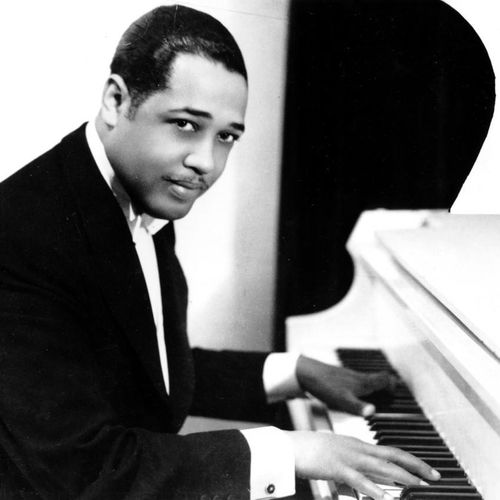 As a 4-year-old sitting and listening to his mother play the piano tune “Rosary,” he cried.

“It was so pretty; so pretty,” he’d said. By age 7, he had developed a bond with music so strong that he began to play piano on his own.

He’d met his first love. It was through certainty that he’d said to his next-door neighbor, “One of these days I’m going to be famous.” The young Edward Kennedy “Duke” Ellington (1899–1974) was on his way; and just how far would be something for the world to see.

Ellington’s upbringing in Wash., D.C., was modest, he was “pampered with a sense of self-importance,” hence the nickname, ‘Duke.’ There were two pianos in the Ellington home, but Duke focused more on commercial art and playing baseball. Eventually, his focus shifted as he became mesmerized by ragtime and blues and started meeting other piano players.

Later, Ellington held a job at a local soda fountain. His experiences there led the then 15-year-old to compose his first song: “Soda Fountain Rag.” One of his first gigs was to play piano at a party; he did so until his hands bled. Ellington’s pay for the evening was 75 cents, he’d said, adding that it was “the most money I had ever seen … I rushed all the way home to my mother with it. But I could not touch a piano key for weeks.”

His creativity and talent had already grabbed the attention of many. By his late teens, Ellington had earned enough money to help his parents move into a better home.

Still a teen, Ellington was on a roll. Composing and performing at high-brow events around Wash., D.C., ran a close second to his career in commercial art. He had married Edna Thompson and a baby was on the way. Then in 1923, the call of New York City came and once in Harlem, his career soared. He went from sideman to bandleader of the Washingtonians within a year.

Ellington quickly became a staple at Harlem’s Cotton Club, performing there from 1927 to 1931, the same year he was invited to perform at the White House. This life pushed him to become flexible in his craft. He always needed new music for dance routines, theatrical pieces, radio broadcasts, and supporting other acts. This led to a Victor recording contract and critical acclaim as the “preeminent African American jazz band of its day.” The accolades, the exposure, the successes, never stopped. Critics have called the vastness, the depth of his music “bewildering.”

Primarily a music composer, Ellington worked with a number of lyricists for some of his most well-known songs including “Take the ‘A’ Train,” “Mood Indigo,” “Echoes of Harlem,” “Concerto for Cootie,” “Don’t get Around Much Anymore,” and many more.

According to critics, Ellington “was not content to be labeled a jazz artist … his dense textures and experimentalism reveal attempts to break out of typical jazz molds.”

The popularity of big bands waned after World War II bu Ellington kept his band together, paying expenses from his royalties as a composer.

To this day, his legacy in not only Black music but American music remains unrivaled. His talents were multifold: composer, bandleader, arranger, pianist, and interpreter of African American history and culture. Like any great artist, his creativity endures and will continue to be evaluated for many years to come.

Since his death in 1974, Ellington’s many achievements continue to be explored; his music remains alive.

Mourning and Mayhem: California Reacts to the Brutal Killing of George Floyd