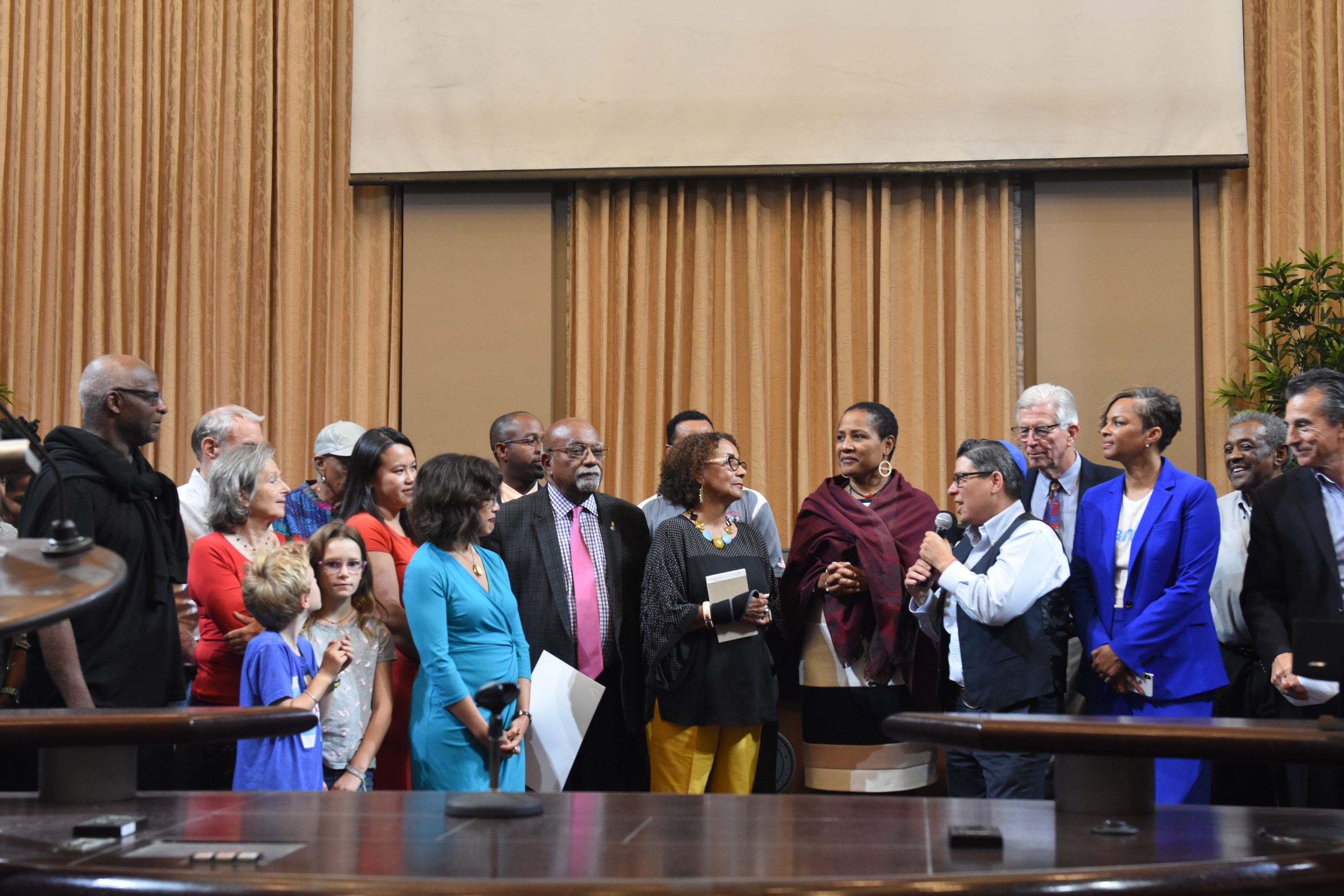 The Oakland City Council and community members this week honored Gay Plair Cobb for her “tireless efforts” and passionate dedication as a so­cial justice advocate and leader for over 35 years.

More than 50 friends, family, council members, colleagues and appreciative Oakland resi­dents crowded into the space at the front of the council chamber to join the council’s recogni­tion of Cobb, who recently re­tired after decades as head of the Oakland Private Industry Council (PIC). The resolution honoring Cobb was authored by Councilmembers Noel Gal­lo and Lynette Gibson McEl­haney.

Gallo said he was pleased to be “recognizing an outstanding woman who has provided lead­ership in the City of Oakland, who has mentored many of us, including myself.”

Councilmember McElhaney emphasized Cobb’s support for other nonprofits and asso­ciations and her work to support the leadership of Black women through the Black Women Or­ganized for Political Action (BWOPA). McElhaney also mentioned that Cobb is co-publisher of the Oakland Post, which “lifts up the voices of the unheard and the marginalized.”

Council President Rebecca Kaplan thanked Cobb for her leadership of the Oakland Pri­vate Industry Council (PIC), which has provided job train­ing and employment for thou­sands of local residents.

“Getting people access to jobs is so essential to what it takes to build a vibrant and thriving community of equal­ity, justice and participation,” said Kaplan. “So much of your work has been in assur­ing that people get that access to a job, and that make such a difference in people’s lives.”

Referring to Isaiah in the Bible, Kaplan said, “Isaiah kicks open the door of the temple, interrupts the prayer service, and says to the peo­ple, ‘God is not impressed with your fasting and wailing if you’re not taking action to uplift those who ae struggling and to help the homeless and to help the poor.’”

Turning to Cobb, she said, “Not only by your words but by your actions you have modeled that.”

Councilmember Larry Reid said, “I want to apologize to you Gay for having to fight this institution to get us to do the right thing as it relates to putting people into (job) training and into jobs that are going to pay them a livable wage. You have always been a leader of those efforts.”

In her remarks, Cobb spoke about her years of struggle to secure city funding for em­ployment and job training for Oakland’s youth, unemployed, underemployed and marginal­ized.

“This has been a very inter­esting journey for me, (dealing with) city government and city politics. … It has not always been easy. It has sometimes been painful,” she said.

She gave a shout out to Oak­land’s nonprofit community, which fights for jobs, housing, health, environmental justice and criminal justice reform.

“We know that it is hard work,” she said. “We know that nonprofits labor under very dif­ficult conditions. They lack re­sources, they increasingly have to leave Oakland because they cannot afford the rising rents. But they continue to speak truth to power. And they do it at great risk, sometimes, to their own well-being, to their own ability to continue operating.”

“It was an amazing time for me to able to transform my life and to pick up on some op­portunities,” said Simmons. “It allowed me to go through a program … and go into the workforce and work produc­tively and pretty much started my career.”

PIC’s work “is tireless, and it is so essential to Oakland resi­dents,” she said.

In a summary of Cobb’s ac­complishments, the City Coun­cil mentioned that her social justice work goes back to her years as a college student who participated in the “historic freedom rides leading to the desegregation of lunch coun­ters and other public facilities” in the South.

As the Chief Executive Of­ficer of the PIC, Cobb has been at the “forefront of the fight to provide a livable wage and sus­tainable employment for Bay Area residents” since 1985. Through her leadership and partnership with community groups, the Cypress-Mandela/ Women in Skilled Trades Pre-apprenticeship Training Center was established in West Oak­land after the 1989 Loma Prieta earthquake.

She served as a member of the Alameda County Board of Education from 1982-2006, “working for system change, high educational achievement and equity for youth who are in the juvenile justice system.”

Cobb served on the board of the San Francisco Foundation from 1998 to 2008, focusing on “community and workforce development … and promot­ing diversity and inclusion in the foundation’s investment practices.”

City Hosts Community Meetings on Land Use and Construction Jobs