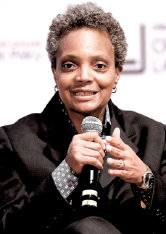 As protesters demonstrated in at least 140 cities across the country in response to the police killing of George Floyd in Minneapolis and other recent cases of police violence, the city of Chicago was also rocked by widespread protests.

Over the weekend, protesters demonstrated in Chicago’s downtown area, on the city’s south and west sides, and even in Boystown, Chicago’s predominately white LGBTQ neighborhood on the city’s north side. Musician Chance the Rapper – a Chicago native – joined at least two protest in the city.

Amid the unrest, Mayor Lori Lightfoot, Chicago’s first Black woman mayor, had harsh words for President Donald Trump, who referred to protestors as “thugs” on Twitter and said “when the looting starts, the shooting start,” a reference to racist remarks made by segregationist Alabama governor George Wallace during civil rights protests in the 1960s.

At a press conference, Lightfoot said that Trump’s “goal is to polarize and destabilize local government and to inflame racists’ urges. And we can absolutely not let him prevail.”

She added, “I will code what I really want to say to Donald Trump. It’s two words. It begins with ‘f’ and it ends with ‘you.’ I will not remain silent while this man cynically tries to turn this incredibly painful moment into one for his own political gain.”

Last week, Lightfoot, shared how the George Floyd video impacted her personally. “It’s impossible for me as a Black woman who has been the target of blatant racism over the course of my life not to take the killing of George Floyd personally,” she said. “Watching that poor man beg for his life and for the ability to breathe and then watching the life leave him there in the streets I felt angry, I feel sickened, and a range of other emotions all at once. Being Black in America should not be a death sentence.”

As protests rocked the city, Lightfoot, along with Illinois Governor JB Pritzker, called for peace in response to looting. She instituted a 9 p.m. curfew citywide. She also called in 375 Illinois National Guard troops to control the downtown perimeter and shut down the entire CTA bus and train system, presumably to control movement of protestors. Some Black Chicago alderman have been critical of the mayor’s decision, however, saying her move to seal off downtown pushed looting into the city’s already under-resourced communities on the south and west sides.

“None of these decisions are easy,” Lightfoot said in response. “Not one. None of them will be easy for the foreseeable future. But the voters elected me to make the right calls, the tough calls and not pander to the crowd, but to do what I felt was best based on the best information and listening to the experts that I have around me and listening to the voices of our residents who are hurting and in need. And that’s what I will continue to do.”

Over the weekend, Lightfoot toured damage to local businesses in the Bronzeville neighborhood on the city’s south side with Alderman Pat Dowell, another Black woman. Residents have also come together to clean up damage to businesses across the city. “We must rebuild, reopen, and heal together,” Lightfoot said. “Despite the setbacks… Chicago will come back stronger.”

Mourning and Mayhem: California Reacts to the Brutal Killing of George Floyd