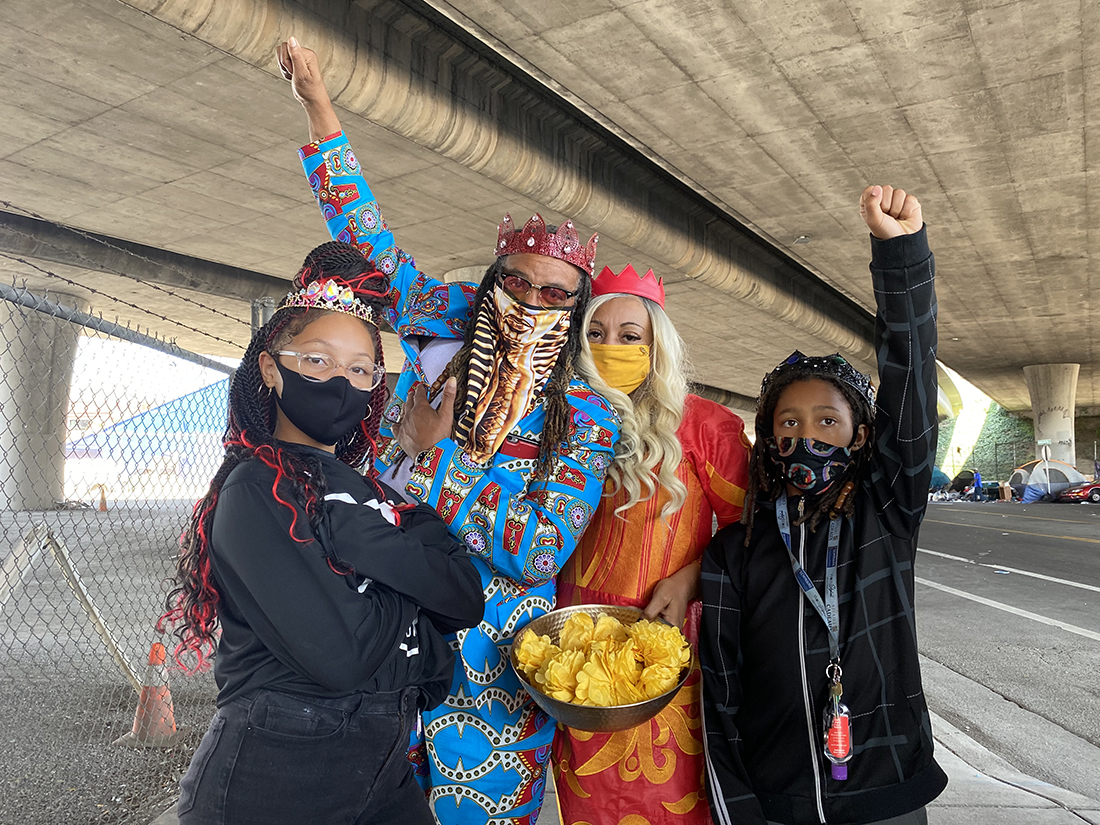 The Smiths Family after feeding homeless under the 580 overpass in West Oakland on July 25. (Left to Right) Fantastic, Rev. Frank the Blessed, Lady Tapatha, Mr. Famous. Photo by Michelle Snider.

Wearing their crowns together, the Smith family say they are affectionately known as “The Bay Area Royal Family,” doing fellowship and inviting families to learn, grow and heal with each other on Oakland’s streets through their project, the Broken Chains Empowerment Center.

With their four children—Tiana Essence, Fabulous, Fantastic and  Mr. Famous Finesse—Street Rev. “Frank The Blessed” Smith and Lady Tapatha Kendrick Smith seek to empower the next generations for growth in ways they did not have for themselves in the past.

Through Broken Chains Empowerment, the family is dedicated to feeding homeless people from Oakland to Sacramento. When the Smiths station themselves in Oakland at West Grand and Martin Luther King Jr. Way, they usually feed an average of 150-200 people. They have been known to feed the homeless on such a regular basis, their youngest children Fantastic (12-years-old) and Mr. Famous (10-years-old)  said it is ingrained as a part of the duties they will continue on for the rest of their lives.

Both Frank and Tapatha are ordained through deliverance ministry—the Christian faith that performs purifying rituals to remove demons and evil spirits that are believed to be attributed to physical, mental, spiritual, and emotional issues within people’s lives.

Since starting the Broken Chains Empowerment Center, they have developed strong partnerships with Paramount Films, Parent Voices of Oakland, and Roses in Concrete.  They have also worked with Choices For Freedom for the last eight years.

The Smiths have worked directly with youth centers, advocating to empower men and women and deliver certified training in human and sex trafficking awareness. They offer empowerment workshops to corporations, non-profits and individuals that bridge the gap of understanding between the upper class and the needs of the streets.

The COVID-19 pandemic has put a temporary halt on some of these activities, but it has not stopped them from doing their work locally in safe capacities.

Frank Smith is a licensed caterer and has a catering business called Holy Smokers in the Bay Area which has connected with several restaurants and church facilities in order to access high standard kitchens with food safety awareness, facilities he uses to also put together meals for the homeless. 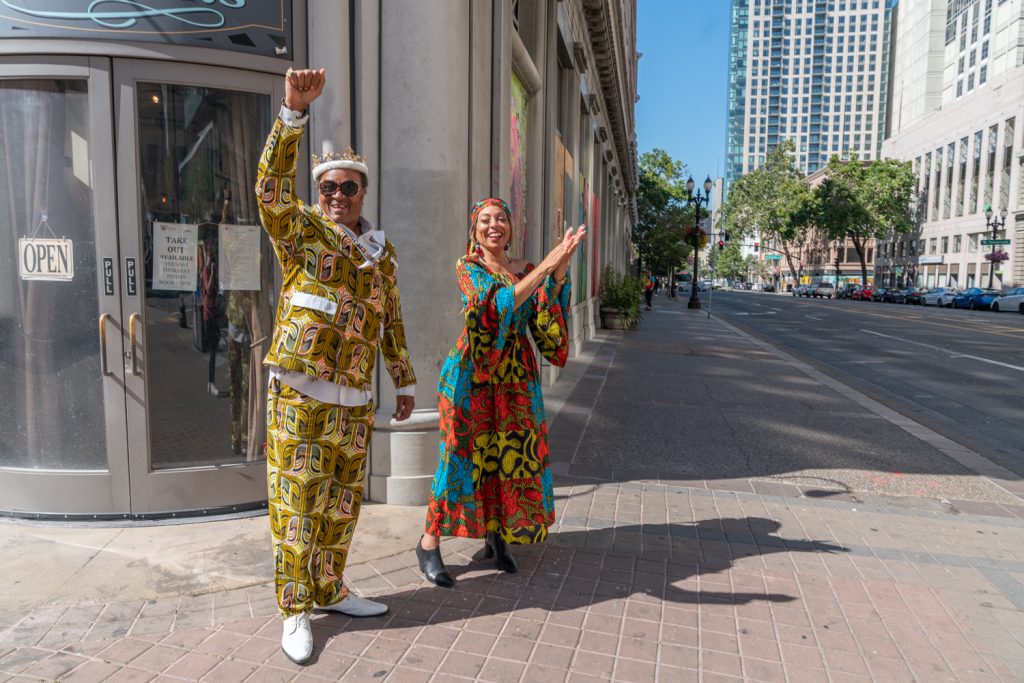 “Frank The Blessed” Smith and Lady Tapatha Kendrick Smith cheer as a group of about 50 young skateboarders, bicyclists, and roller skaters pass by them on Broadway in Oakland with protests signs for Black Lives Matter on July 10. Photo by Michelle Snider.

Frank Smith was born in San Francisco and moved to Oakland in the ’70s. He earned the name ‘Frank the Bank’ from his peers by the 10th grade because he was always finding ways to get money, eventually accepting an invitation from two women who asked him to be their pimp when he was 14-years-old.

Raised in a Christian home, the drive to care for himself and his mother as well as the influence of  Blaxploitation movies like “The Mack” and “Sugar Hill,” made becoming a pimp at a young age appealing.  “We didn’t know in our community that movies like that was empowering us to do death to ourselves,” he said.

Not only did Frank Smith take care of his own family, at a young age he paid for groceries for single moms and their children’s school pictures. “Because I had no man in the house I always felt like I was the one to carry the underdogs,” he said. “I didn’t understand it back then, but I also suffered from a spirit of rejection.”

Eight years ago he “came back home” to his faith and changed his name to ‘Frank the Blessed,’ although he is still fondly remembered by many in Oakland as ‘Frank the Bank.’

“My life has been spared. I’ve been through 13 different prisons, nine different county jails in a five-year course,” he said. From the age of  22 to 27, he was locked up. There were five attempts on his life, two of which he said he knew the prison guards were involved.

Through it all he could feel his grandmother praying over him, protecting him. He said, “I know that there’s a greater spirit than what my hands can touch, see or feel, and when the Holy Spirit asked me ‘Will I wear the crown to be ridiculed?’” he decided to follow in the footsteps of Jesus, whom he calls Ashur, who fed and healed the people.

Having a vision at five in the morning, Frank Smith realized that Tapatha Smith was meant to be his wife. He went to see her when she was passing out food to the homeless and asked her to marry him.

Speaking of his wife, Tapatha, he said, “She’s allowed the king in me to rise up.”

Tapatha Smith was born in San Diego. Her family moved to the Bay Area when she was in third grade and she was raised in Fremont. Tapatha grew up in a deliverance ministry. Her mom, Dr. Evangelista, is a world pastor.

After traveling to Germany and working for the federal government for over a year, Tapatha Smith came back to the Bay Area and started working with tech company Apple in 1989. She worked her way up from building computers to becoming a process engineer. Over the years, the heavy workload turned her into a workaholic.

Eventually, her thyroid stopped functioning properly and she needed to improve her health. She attributes many women’s health failures to being overworked, in part due to patriarchal social structures. “Why? Because we’re being the husband, wife, we are having to juggle so much we are blowing our thyroid out,” she said.

Because of Tapatha Smith’s issues with her thyroid, at the time she met Frank Smith she was not looking to be married. She was able to present herself as a healthy person in public, but she often hid her poor health and would need to retreat home to recover.

When Tapatha first met Frank, she said she watched and observed Frank for 30 days at the locations where he and his children fed homeless. What really stopped her in her tracks was his unique appearance. “He just looked like this giant, rugged king,” she said.  Even before he was wearing a crown she could see his crown.

She said she had always seen herself as a queen. One day, she saw Frank helping a lot of men, and she thought that was powerful —  that he was not just feeding them but calling upon men to hear an uplifting message. She also saw there were a lot of women that needed help which inspired her to present an uplifting message for women as well.

“For me, understanding that the family structure is so broken now, I believe it starts with God the Creator, man, the woman and the children,” she said. “It stopped me in my tracks to listen to him.”

When Frank asked her to marry him, she made him wait patiently 40 days and 40 nights — until they married on May 1, 2017 — to consummate their union. They both agreed their partnership was deeper than physical attraction alone and needed time to harmonize.

Before meeting Tapatha, Frank said he had experienced homelessness as a single father for two-and-half years and struggled with being turned down by housing programs. When Frank introduced Tapatha to his four children, Tapatha embraced them as her own, and the children embraced her as their mother. A sense of stability formed into a family unity that now works together.

The Smiths’ parenting style is one of strict discipline that can be followed with rewards. They encourage their youngest daughter, Fantastic, and son, Mr. Famous, to be different and find themselves, teaching them that being different is valuable. Screen time on phones is limited while educational, community work and personal spiritual growth fill their busy schedules daily.

On their organization’s website Feet2DaStreet.org, Lady Tapatha says, “Each of us started at a young age as students of the Gospel with a praying and Christian upbringing. Yet our personal choices took us on completely opposite paths to our current situation.  I, Lady Tapatha, chose the church world and corporate America. Street Rev. selected to be a man of leisure, fast cars, women, and money.  Both paths led us to lifestyles that caused great pain, forcing this man and this woman to review our lives and fight for HEALING and CHANGE.”