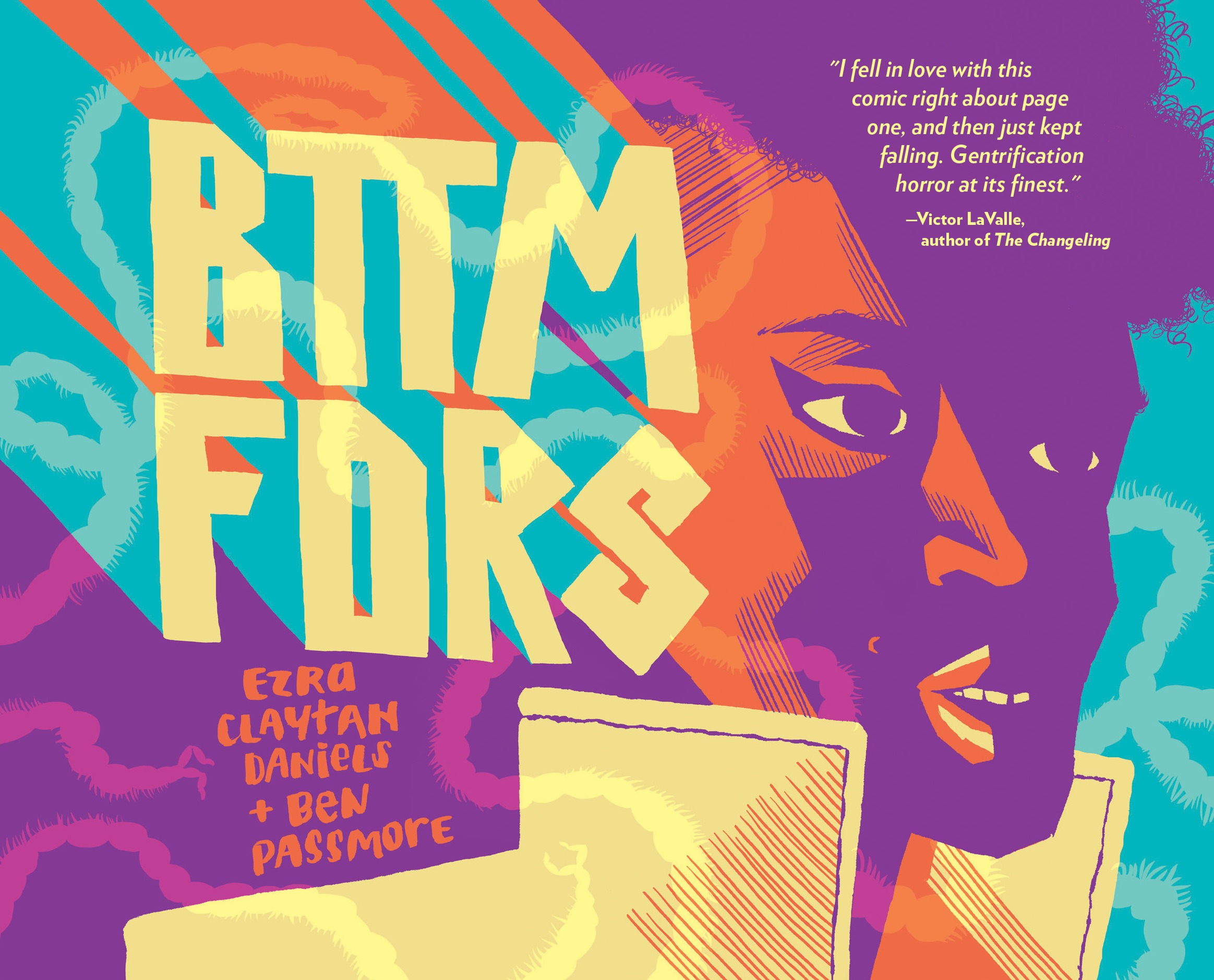 Your first place all your own needs to be ah-mazing.

Big-screen TV for gaming. Fridge for snacks and drinks. Sofa for kicking back, a few good chairs, and places to hold your stuff. Maybe your parents will help out. Maybe the landlord will let you paint. Maybe, as in “BTTM FDRS” by Ezra Claytan Daniels and Ben Passsmore, your new place will be interesting.

When it came time to finally get her own apartment, Darla didn’t bother to look far. She grew up in Chicago’s Bottomyards and though it still wasn’t the safest place on Earth, the former ghetto was gentrifying. That counted for something, right?

Her father hated the building; he warned her away and yeah, it was super-creepy but the rent was good. The place was roomy, but also had room for improvement: as Darla moved in, the electricity kept going out and her friend, Cynthia, messed up the plumbing. Even so, Darla had neighbors: a famous rapper moved in down the hall and she met an elderly lady and her son from downstairs.

Was it the stress of the move, then, or the stress of living in the place itself that made Darla fight with Cynthia soon after Darla spent her first night alone?  Who knows, but they argued and the friendship was over – or Darla thought it was, anyhow, but Cynthia had second thoughts. She snuck back into Darla’s apartment, got totally creeped out, hid in a cabinet, and fell down a tunnel…

… and into a creature that wrapped Cynthia into itself and overtook her body.

Unaware of the deadly organism that her best friend was fighting in the basement of the apartment building, Darla hung out with the famous rapper down the hall until she started noticing a lot of weird things. There were cameras in the apartments, and eerie noises. The building superintendent was super-creepy and the whole place was like a dungeon. And then she found Cynthia – or, at least, what was left of her.

Was there time for Darla to get out alive?

If you’re not familiar with graphic novels – which are basically full-length stories in comic art form – “BTTM FDRS” might take a bit of getting used to. It doesn’t help that this tale starts abruptly, and with racism that feels like a slap.

Keep reading. That slap ultimately turns into a shiver.

With color-blocked panels and not a lot of fluff or dialogue, authors Ezra Claytan Daniels and Ben Passmore take readers into what could be perceived as commentary on today’s social problems, or sly pokes at gentrification and modern segregation, in the future or now. The story is sly, almost backhanded and, much like the creature in this book, eats its way into your imagination until your hands sweat, your eyes dart wildly, and you realize that you’ve been holding your breath.

Let it go. You’re safe in your chair (for now) but if you’re 15-and-up and you love graphic horror novels, here’s your next scare. For you, “BTTM FDRS” is ah-mazing.

The Dismantling of White Privilege Can Affirm Reparations

The Politics Behind Donald Trump’s Empty Threats on Mexico Border