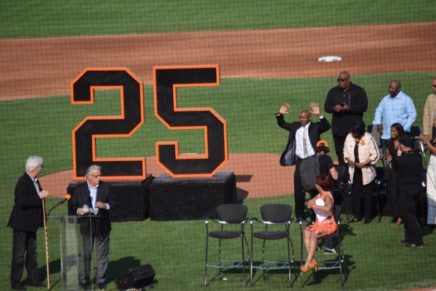 San Francisco, CA – Almost eleven years after Barry Bonds retired, the Giants finally retired his number (25).  In a lavish and unforgettable ceremony, the best player the franchise ever saw took his final bow in front of a sellout crowd.  Wearing his #25 jersey Bonds trotted out on the field for one last time.

The Giants spared no expense, a one-hour ceremony wasn’t enough time to relive an amazing 22 year career.  Also fitting that San Francisco chose to honor Bonds during their homestead against the Pittsburg Pirates.  Bond began his baseball career with Pittsburg in 1986.  For only the 10th time in the franchise’s history, the Giants are retiring another jersey.  Bonds historic career with the ball club began from 1993-2007.

Bonds won seven National League MVP awards, eight Golden Glove awards and was a 14-time All-Star.  He holds Major Leagues Baseball’s all-time record for home runs (762) and walks (2,558).  The best power hitter in baseball was no match for anyone during his time.  San Francisco’s current manager Bruce Bochy shared his memories of Bonds.

“A lot of good memories of Barry,” Bochy said.  “He saw the game in a different way.  Over 700 home runs was just incredible.  He was the guy you talked about, he was the guy you walked with the bases loaded.  No one was handled as carefully as Barry was ever.  You look at the intentional walks and that’s how good he was.  That was the deal, don’t let Barry beat ya.”

In a magical celebration at AT&T park, the Giants brought back some of the greatest players to honor Bonds tonight.  Hall of Famers Gaylord Perry, Orlando Cepeda, Juan Marichal and Willie McCovey.  Dusty Baker and Jim Leyland, Bonds former managers shared some kind words as well as Mays.

“Without question he is the best player I ever managed in my 22 years as a major league skipper,” said Leyland. “Let all of us be thankful that we had the opportunity to see one of the greatest players that’s ever lived for so many years.”

“When people talk about, ‘Oh, who’s the best ballplayer in the world?’  I don’t care,” said Mays.  “I played my 20 years, 22 years, whatever it might be.  Give somebody honor, that deserves to be in the Hall of Fame.  The Hall of Fame is a type of fraternity that, when you get there, you’ll say, ‘Man, how did I get here?’  And I want him to have that honor be something that happens to him.”

“Vote this guy in!” Mays added.

It was an incredible sendoff that Bonds deserved.  The emotion was overwhelming for the retired player as he thanked his family, teammates, former managers, executives, friends and the fans.  Bonds got teary eyed when thanking his father, not knowing why he was so hard on him in his younger years but now understanding what it took to blaze a trail of greatness as he did in baseball.

“I am overwhelmed with emotions as the reality of this day sets in,” Bonds said.  “This may come as a surprise to a lot of people, but as a child I didn’t even want to play baseball.  I wanted to play all sports — basketball, football, ride my bike, all the things that kids do.  But once my mom signed me up.  I got my first taste of what would be my lifelong passion.”

“I always questioned why he was sympathetic to others, while I was out there working my butt off,” Bonds remembered of hid late father (Bobby Bonds).  “Every time I’d say something like, ‘Hey, Dad, I hit two home runs today.’ He would say, ‘Good. Hit two more tomorrow.  Doesn’t seem fitting to be here without my dad,” said Bonds wiping tears from his eyes.

“Thank you San Francisco, thank you for making all my dreams come true,”

Baker who was Bonds former manager from 1993-2002 was also a close friend of Bonds late father.  Baker brought some laughter as he remembered Bonds working in the wee hours before everyone got to the ballpark but also recalled Bonds often times sleeping when others took Batting Practice because he was too tired from working out early in the morning.  Baker’s words were heart felt when he took a walk down memory lane reminiscing about the days when he played baseball in Riverside, CA with the older Bonds.

“I thought Bobby Bonds was the greatest prep-school athlete I had ever seen in my life until one day Bobby Bonds told me that ‘my son is going to be greater than me,'” said Baker.  “I couldn’t see that at the time, because I hadn’t seen Barry play much before he went to [Arizona State].  But he told me, my son — and I told Barry this — is more dedicated and works harder than he did, and Bobby was right.”

Bonds still hopes to one day be inducted into the Hall of Fame despite the unexpected ending to his career.  Until the time comes he’llalways have the remarkable memory of the phenomenal sendoff the Giants gave him.  Bonds had an undeniable, exceptional career, his story won’t end here tonight.  Great players like Bonds don’t fade away, their memory lives on and who knows maybe one day we’ll see him in Cooperstown.

49ers get first pre-season win against the Cowboys