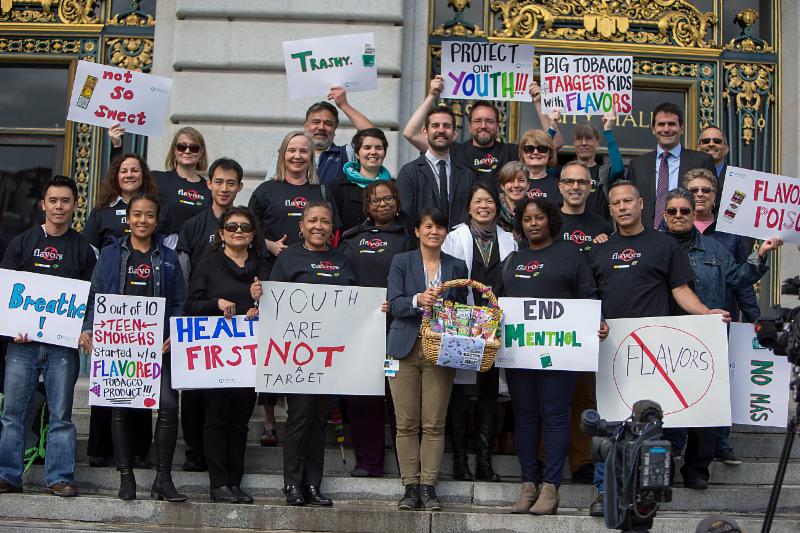 A silent public health tsunami ] has been quietly washing through the legislative halls of cities across the Bay Area and like tsunamis most people don’t realize its force and magnitude until it is right upon them. This tsunami is a hard-fought movement of the just, a powerful game changer, the likes of which we have never seen.

Even we, the African American Tobacco Control Leadership Council (AATCLC), who have been working on this issue for over a decade, stand in absolute awe.

We pinched ourselves when San Francisco’s Board of Supervisors unanimously voted to prohibit the sale of these deadly products within the entire City and County of San Francisco.

Mayor Ed Lee signed the bill into law on July 7th; it will become effective April 1, 2018.  Setting the stage to stop the recruitment of future generations of San Franciscans from becoming the replacement smokers for the tobacco industry’s dying customers.

Not another generation of seduced children who because of their zip code are more likely to step on a landmine of nicotine addiction than inherit the good health outcomes fostered by growing up in healthy vibrant communities.

Detractors of cities and counties who are no longer willing to be complicit in the distribution of these deadly products say the cities will just lose tax revenue as people buy them from neighboring cities, well that city won’t be Oakland.

Oakland City Council will vote on similar legislation July 18 and more cities and counties are in various stages, from beginning conversations to final votes, of the process.

The African American Tobacco Control Leadership Council (AATCLC) has worked tirelessly to get menthol out of our communities, and we applaud these efforts.  Tobacco control and prevention have always been a local grassroots fight.

We know that while other societal ills continually rivet our communal attention and resources, tobacco remains the number one killer of Black folks.  Taking 45,000 Black souls each and every year.  We know that strong public health policy will foster healthier communities and allow us to better deal with other critical issues facing us.

The AATCLC calls on our communities, our health departments, our leadership groups, our clergy, and our businesses to take the passage of these historic laws as an opportunity to support our legislators as they take on the tobacco industry, these federally adjudicated racketeers are better resourced and equipped than the Mafia.  Our community has borne the brunt of their racialized profiling.  The industry will fight harder to keep what they think of as “their turf”- that would be Black folks. Tell them to GET OUT!

The African American Tobacco Control Leadership Council (AATCLC), a collective of tobacco control experts dedicated to research, community collaboration and public engagement, is working to stop the 45, 000 preventable deaths of African Americans due to tobacco related diseases. Find out more at
savingblacklive.org