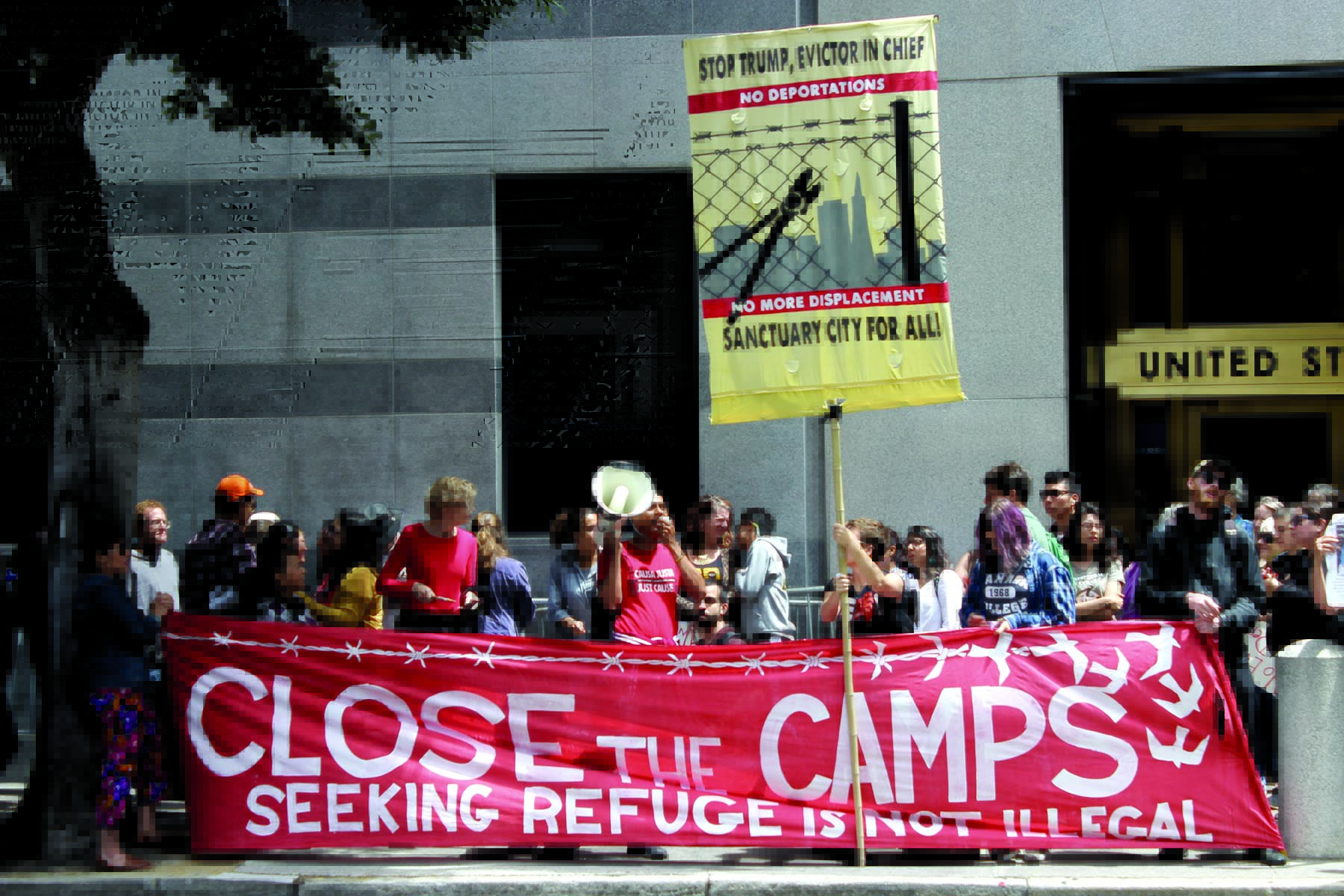 Dozens of bay area groups and organizations as well as large crowds of unaffiliated people are protesting outside of ICE’s San Francisco federal building everyday around noon for the rest of August. The protests are part of the Month of Momentum to Close the Camps, a month-long event

that’s working to build collaborative resistance and rebellion against both the existence of concentration camps for immigrants and government policy that criminalizes immigration.

“Immigrants are fleeing danger and persecution and they’re being imprisoned here” said Lisa Geduldig, who ‘s part of the ad hoc group

of East Bay women who are organizing the action. While the group is encouraging people to attend any day they can, they’ve organized each day to support different professions and/or identities. The schedule lists days dedicated to lawyers, adoptees, health workers, journalists, poets and many others.

“I think people have been needing a forum,” said Gedul

dig. ‘They’ve been excited that they have their own day to show up with others in their profession or social group.

Aug. 19th’s Monday protest at noon, titled Queers Melt ICE!, will be dedicated to queer people. Queers Undermining Israeli Terrorism (QUIT), Gay Shame, and Lagai—Queer Insurrection are all helping to organize it. The groups have agreed to three points of unity: closing all the concentration camps, ending all deportations, and abolishing ICE.

“Solidarity knows no bor­ders and it’s important to re­member that queer people are everywhere,” said Kate Ra­phael, who co-founded QUIT and came up with the whole idea for the Month of Momen­tum. “Queer people are not safe in a lot of places, situations can change quickly, and they need to be able to freely move to get to safety.”

Aug 10th’s protest was dedi­cated to tenants. Members of Causa Justa/Just Cause, the East Bay’s Tenants and Neighbor­hood Councils, and the Housing Rights Committee of San Fran­cisco all showed up with sup­porters. Around 100 protestors waved signs, chanted in both English and Spanish, played drums, and gave and listened to speeches. Passing cars, trucks, taxis and city busses honked in support. When an unidentified man approached and screamed “Build the wall,” protestors chanted, “We stand with immi­grants” and he quickly left.

“We’re out here making the connection between housing, migration, and forced displace­ment,” said Leticia Arce who works as a lead organizer for San Francisco Causa Justa/Just Cause.

“Immigrant tenants are in­timidated by their landlords who tell them that since they’re undocumented, they don’t have rights and can easily be evict­ed,” said Arce. “They’re afraid to enforce their rights due to the ICE’s crackdowns.”

Faith groups have also been part of the Month of Momentum. Aug 9th’s event was co-hosted by the Interfaith Movement of Human Integrity (IMHI) and the Council on American Islamic Relations.

In a speech at the event, IMHI director Rev. Deborah Lee en­couraged people to expand the focus of their rebellion beyond Donald Trump.

The Month of Momentum’s organizers are especially en­couraging people to come out for the final day’s protest at noon on August 31st entitled “EV­ERYONE: Sustaining the Mo­mentum.” It’s the only day not dedicated to a specific group and is a broad call for anyone who wants to come out.

Protestors feel that when the Month of Momentum ends, the work must continue.

California Democratic Party Black Caucus Elects All Women to Board