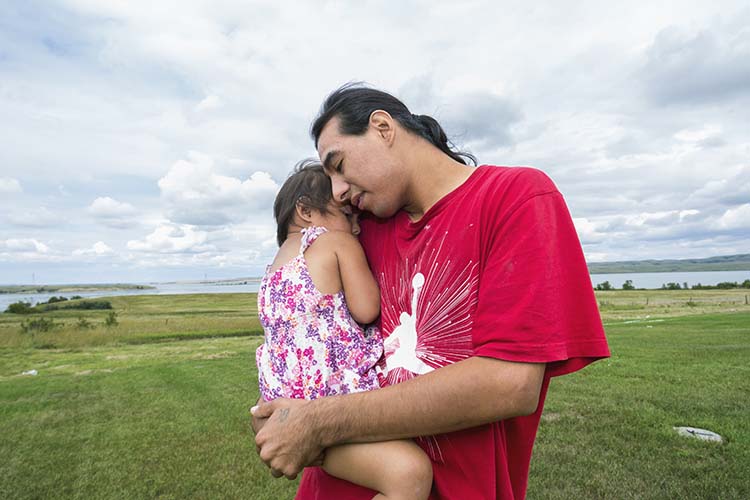 When photojournalist Wesaam Al-Badry, a first-year student at UC Berkeley’s Graduate School of Journalism, went to rural North Dakota to photograph a Native American family struggling to stick together in the face of poverty and isolation, he actually moved in with the Thunderhawks for a few weeks.

Al-Badry, 34, didn’t have much money himself, and there wasn’t a nearby hotel where he could rent a room. And the experience of living on the edge of nowhere was familiar to Al-Badry, who escaped Iraq with his family in 1991 and spent two years in a refugee camp before coming to the U.S. and settling in Nebraska.

“I am happy when I am there because I feel like I am at home,” he says. “We talk; we spend endless hours just talking about cultures and traditions. It is that love of community and learning from one another that feels so familiar.”

Over the course of several week- or two-week-long visits, Al-Badry produced a series of evocative portraits of the Thunderhawk family that won him UC Berkeley’s 2019 Dorothea Lange Fellowship, a prize for faculty or graduate students who demonstrate outstanding work in documentary photography and have a creative plan for their future work. 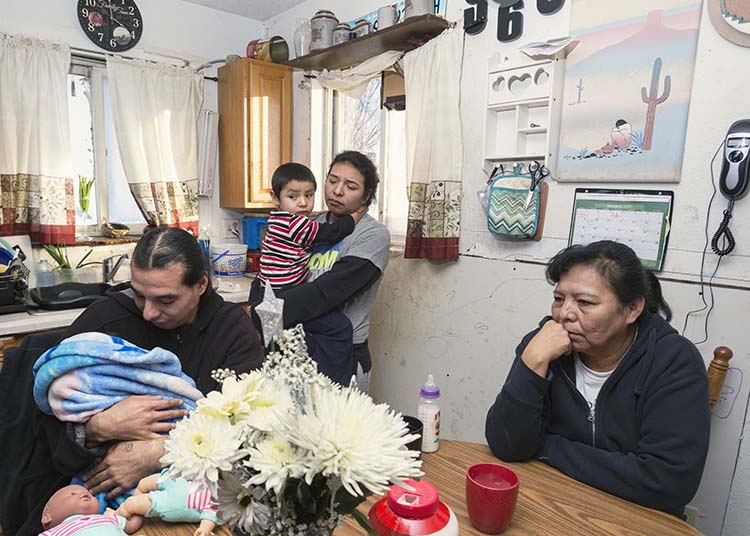 Jen Thunderhawk, right, sits in the kitchen with her family.

Al-Badry’s photos capture Jen, the matriarch, trying to teach her children and grandchildren traditions of her Lakota tribe, the chaos created when 12 family members live under one roof and the everyday hardships of life on a reservation in the rural Midwest.

“I come from the poor working class,” he adds. “It wasn’t new to me. It wasn’t new to me when they talk about living paycheck to paycheck or trying to get 15 minutes of overtime for that little extra cash, or fighting their boss for their breaks.”

Al-Badry met the Thunderhawk family while he was covering the Standing Rock protests in 2016 and 2017. The Missouri River, which activists worried could be polluted by a breach in the contested Dakota Access Pipeline, runs right through the family’s backyard.

“When the media leaves, I ask myself, what is the aftermath for the people who are still there,” he says.

His question springs from his experience in the refugee camps of his youth, where he and his family often interacted with the news media. The experience led him to jobs at Al Jazeera America and CNN before he enrolled at Berkeley’s journalism school.

“The media can control the narrative of what gets told and how,” he explains. “I was on the other side of the lens for the longest time. I think subconsciously I am attracted to stories that have to do with me or my stories or my past.”

Al-Badry says he plans to use the $4,000 Lange fellowship to continue his work documenting the Thunderhawks, with the hope that he can someday publish their complete story.

And the story hasn’t stopped. The family’s home recently burned down, Al-Badry says, and a remarkably cold winter has made life even harder. Al-Badry was with the family earlier this month to document how they are adjusting and coping.

“I’ve been there for Jen’s birthday for the last three years,” he says. “Being with them for so long, you become part of that family.”

COMMENTARY: Should the Grizzlies trade Mike Conley and Marc Gasol to The Lakers?