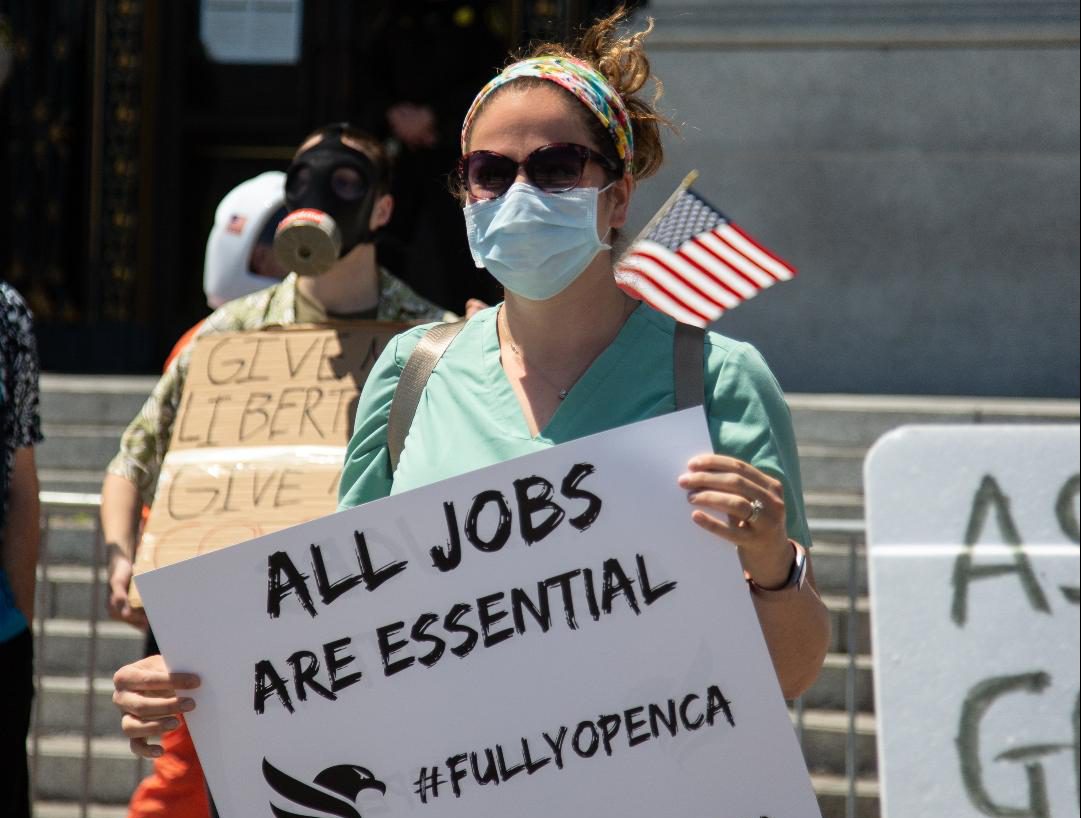 Approximately 200 people gathered in front of San Francisco City Hall on May 1, to protest the stay-at-home measures put in place to slow the spread of COVID-19. Bay area counties extended the shelter-in-place order through May 31, with select businesses allowed to reopen under specific conditions.

Event organizer Clint Griess, the Local San Francisco organizer for wehaverights.com, said he thinks that coronavirus is no worse than the seasonal flu. “This is government overreach at its finest…and we are not buying the hype,” he said. “The pandemic isn’t at all what they say it is and we are not afraid.”

Protesters held signs and chanted “open California now” and “fire Newsom” as cars drove around city hall, honking and donning American flags. One sign read “Stop lying to us, we are not China.” Approximately half of the protesters were wearing masks.

Joan Leone, a Bay Area resident and Trump supporter said she thinks that California should reopen immediately for the sake of those who can’t afford to lose their livelihoods. “This whole thing is about shutting down the economy hoping that that will prevent President Donald Trump from being elected,” she said. I’m not doing this just for me I’m doing this for all the people who need their jobs.” 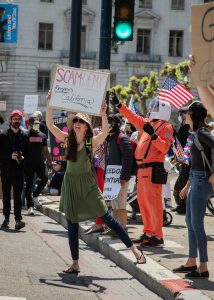 Approximately 200 protesters gathered at San Francisco City Hall on May 1, to protest the extended shelter-in-place order and advocate for reopening California. Photo by Saskia Hatvany.

At least two healthcare workers participated in the protest. Rachel, a Bay Area nurse, said she thinks California should begin a cautious reopening as soon as possible. She said many of her coworkers had been forced to take furlough because the hospitals have been emptier than usual. “My job has been affected because people are not coming to the hospital and we’ve had to cancel surgeries. We should be quarantining the old, we should be quarantining the people that are high risk — but young and healthy people should have the freedom to go back to work if that’s what they choose,” she said.

Across the street, San Francisco nurse William Gersten stood alongside a small group of people in counter-protest. “They’ve estimated that shelter-in-place orders have saved 44,000 lives, and as a nurse, it’s possibly saved my life,” said Gersten. “I understand that people’s livelihoods are being affected but you can’t work if you’re dead.”

Gersten said that the protesters should be directing their anger at the current administration instead. “One of the major things we need to do is come up with testing…and that’s where the Trump administration — the federal government — has failed. So if they are really pissed off…they need to focus that on the federal government and Donald Trump who is impeding people from getting tested.”

Today in #SanFrancisco there were healthcare workers on both sides of the stay-at-home order #mayday protests. Here is what two of them had to say. pic.twitter.com/KaNCbwqyJb 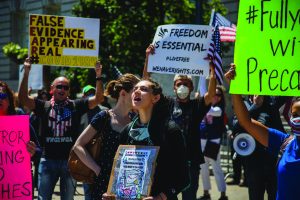