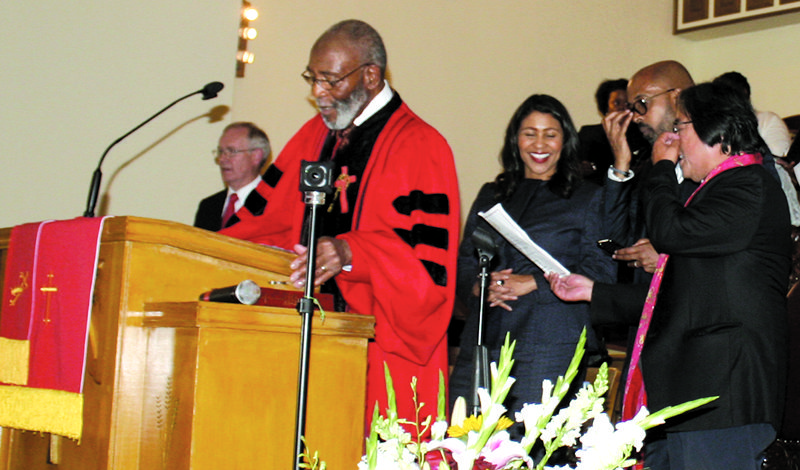 A capacity crowd prayed together at the Historic Third Baptist Church on July 9, 2018 for San Francisco Mayor-Elect London Breed.

An Interfaith Prayer Service , under the leadership of Rev. Amos Brown and  the San Francisco Interfaith Council, provided the opportunity for  a cross-section of our community to come together in understanding, celebration  and support of Breed. Joining members of the Historic Third Baptist Church and the SF Interfaith Council  were members of Congregation Emanu-El, Delta Sigma Theta, Inc Sorority,  San Francisco Business & Professional Women, Inc.,  Missionary Society of Bethel AME Church, Jones Methodist United Methodist Credit Union,  the Baptist Federation, the Saint John Will-I-Am Coletrane  Church , the Presbyterian Church of Chinatown, other religious and non-religious group.

A Muslim Call to Prayer and Reflection on Civility and Respect was followed by the ringing of the “In-Kin Drawing Bell” , a Buddhist tradition .  An Episcopalian Prayer for Inclusion,  Baha’i and Hebrew prayers for Justice, and a  Lutheran Prayer for Collaboration preceded the reading of the Prayer of St. Francis by the Auxiliary Bishop of the Archdiocese of San Francisco.  Words from the 17th President and Prophet of the Church of Jesus Christ of Latter-day Saints followed.

Congregants heard ”Works of Faith” presented by the heads of The Shanti Project, Providence Baptist Church, Lutheran Social Service and Catholic Charities as they reflected on our need to care for those most vulnerable in our community.

The San Francisco Interfaith Council was founded in 1988 by Rita Semel, who summarized its history of collaborating  with diverse faiths and  embracing the spiritual traditions of  San Francisco’s approximately 800 congregations .

Congresswoman Barbara Lee and former Mayor Willie Brown concurred as they also joined in  extolling the works of the incoming Mayor while praying for her support.

Rev. Dr. Frederick Douglas Haynes, III, Pastor of Friendship West Baptist Church in Dallas, Texas, and son of a former Third Baptist Church pastor, electrified  the audience with his theological delivery, comparing the Mayor-Elect to the biblical heroine, Esther, who was chosen  ” for a time like this”. And the response of Mayor-elect Breed justified his comparison.  Recognizing her own heritage she promised to not only deal with present problems in San Francisco but to work to effect necessary changes in the future.

The exceptional  music provided by the Amos C. Brown Heritage Chorale under the direction of Rev. James P. Smith, church organist, set the tone for the evening.  “Joyful, Joyful We Adore Thee”, “Seek Ye First’” and “How Great Thou Art” inspired the audience to vigorous applause. The closing songs, “America the Beautiful” and “Let There Be Peace on Earth” sung by all present, were melodic reminders that we can “walk with each other in perfect harmony” and that  if peace is to be, “Let it begin  with me”.

Congratulations to newly installed (as of Wednesday,July 11, 2018) Mayor of the City and County of San Francisco, London Nicole Breed.