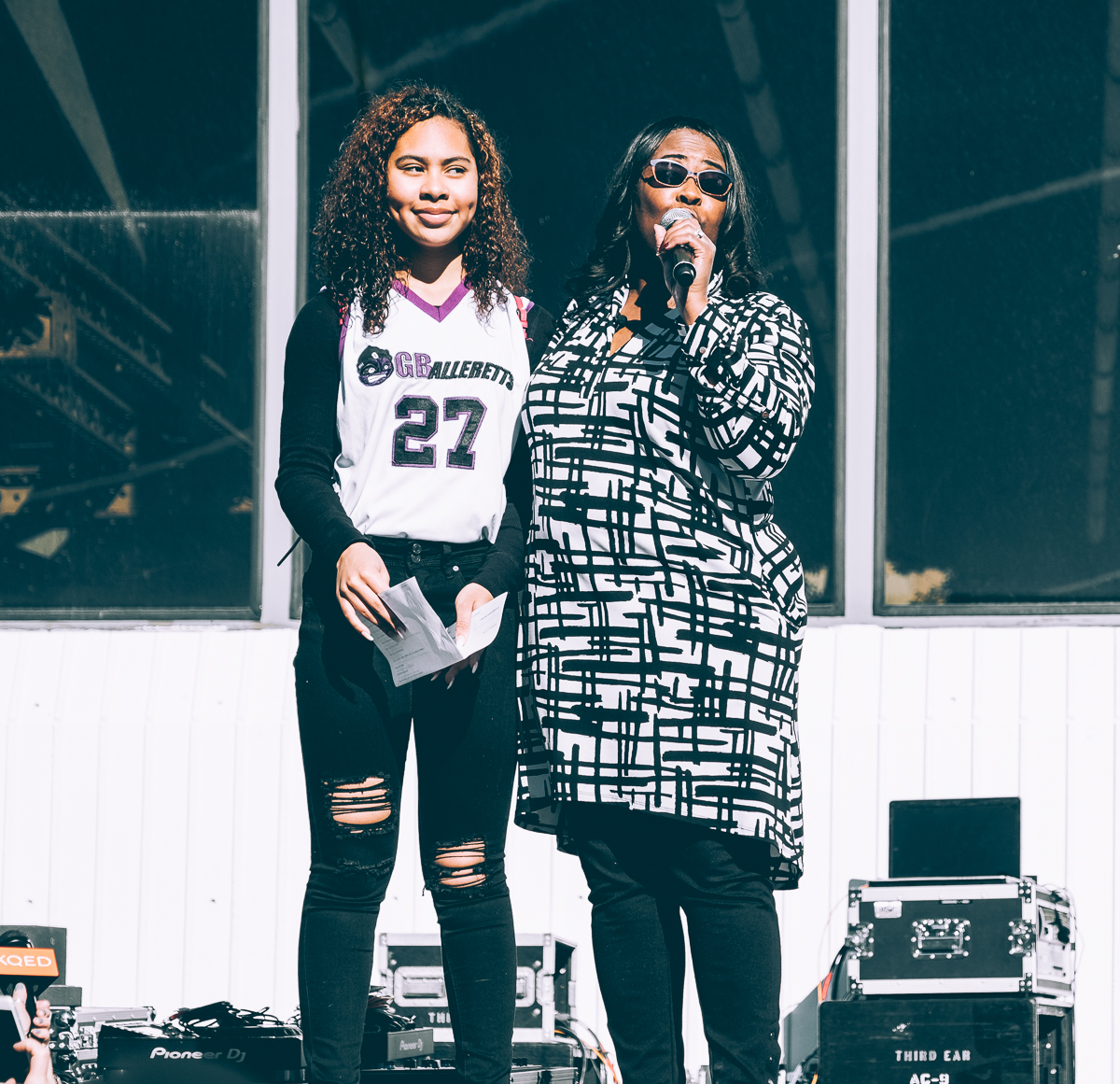 Tatiana Grant stood with her grandmother, Wanda Johnson, at the vigil for her father at Fruitvale Station on Tuesday afternoon. Photo by Amir Saadiq.

About 200 people came out for the vigil marking the 10th anniversary of the death of Oscar Grant III by a BART policeman on New Year’s Day in 2009.
Just a couple of hours into the new year, Grant and some friends were on their way home when a scuffle broke out on the train.
Restrained, lying face down on the platform while outraged passen­gers recorded the chaos on their cell phones, Grant was shot by Johannes Mehserle and died at the hospital. Galvanized by the injustice and sharing the grief of Grant’s fam­ily, community protests and organizing forced the prosecution of Mehserle, leading to his conviction for involuntary man­slaughter in 2011.
At each annual vigil, members of the family, in­cluding Grant’s daughter Tatiana, now 14, gather at the station that they are lobbying to be renamed in Grant’s memory.
“We are claiming that,” Wanda Johnson told the crowd and BART appears to be ready to unveil a mural in March.
Grant’s friends and po­ets gave Spoken Word tributes and community leaders like District 3 Councilwoman Lynette Gibson McElhaney and Cat Brooks of the Anti- Police Terror Project also expressed their support.
BART director Lateefah Simon told the crowd that Grant’s death in­spired her to seek office.
Among the speakers Tuesday were Grant’s mother and Cephus “Uncle Bobby” John­son, who along with his wife, Beatrice, took up the mantle of the Oscar Grant Foundation until Wanda Johnson’s grief subsided.
Since then, Cephus Johnson’s Love Not Blood Campaign has of­fered succor and support ­
to the families of people across the Bay Area and the nation who have lost a loved one to police terror.
The martyrs are well known like Trayvon Mar­tin of Sanford. Fla., in 2012, Michael Brown of Ferguson, Mo. In 2014, Mario Woods in San Fran­cisco in 2015 and most re­cently Agustin Gonsalez, killed in November 2018 in Hayward.
Web site information from the San Francisco Chronicle and Essence magazine contributed to this report.
Related Topics:
Up Next