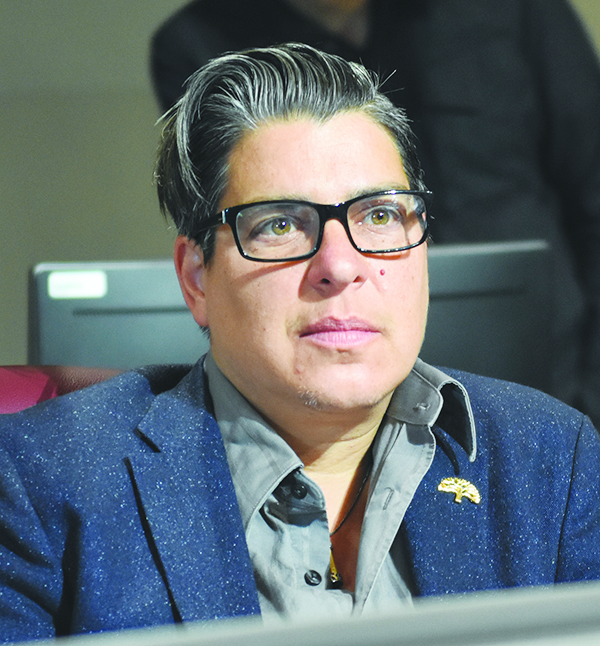 Members of East Oakland Congress of Neighborhoods demand the city keep its promises to cleanup trash and illegal dumping. Photos by Ken Epstein.

As the City Council examines a “midcycle” revision of the city’s two-year budget, community groups are demanding the city allocate money to relieve the suffering of Oakland’s rapidly growing homeless population, clean up illegal dumping and trash in flatland neighborhoods, support job-training for low-income Oaklanders and fund social programs for vulnerable residents by reducing out-of-control spending on the Oakland Police Department.

The budget revisions were discussed at Tuesday’s special City Council meeting and are scheduled to be finalized at next week’s meeting, Tuesday, June 5.

Mayor Libby Schaaf and the City Administration, in a move that dampened demands for new spending coming from the community and some councilmembers, released a report showing that the 2018-2019 budget includes a projected deficit of $11 million.

To close the deficit, the City Administrator has asked departments to cut two percent of their expenditures.

At the same time the administration is proposing cuts, it is requesting the council adopt $31.3 million in new spending, including $1 million for the homeless, $27.5 million for new appropriations for affordable housing, $982,000 for trash cleanup, $1.6 million to hire three new staff in the Human Resources Department and conduct a Fire Academy, and $167,000 for two new employees for the Oakland Animal Shelter.

No mention was made in the City Administrator’s report of going over the budgeted spending limit for police overtime by $17 million, which more than accounted for the hole in the city’s budget.

Most of those who spoke at the meeting—residents and councilmembers—called on the city to fund concerns and community needs that they said had been shortchanged or ignored when the budget was adopted last year.

Rebecca Kaplan presented a list of new expenditures she is supporting, including cleanup crews for illegal dumping hot spots, public toilets and expanded support for homeless sanitation, job training and apprenticeship programs and support for the Oakland Animal Shelter.

Kaplan also requested changes in administrative practices that would not cost additional money but would require new ways of relating to the community: proactive trash pickup based on focusing on hotspots, not just responding to complaints; working with congregations and community-based organizations to establish alternative homeless encampments; and utilizing less costly security guards instead of police for City Hall security that is being requested by the administration.

The city needs to adopt real homeless solutions that “don’t just push the problem from one underpass to the next, at great expense,” she said.

She was also skeptical of the new horse-mounted police unit OPD is reportedly organizing. She asked: who authorized the “ponies”, how much money is being spent and what fund is the money coming from?

Kaplan also raised concerns that the administration has repeatedly failed to carry out resolutions the Council has passed.

“We on the Council should consider that what actually gets implemented is so different than what we voted for,” she said.

OPD overspending for police overtime “essentially accounts for the entire (budget) gap we are talking about,” she said.

Councilmember Noel Gallo proposed that he and his fellow Councilmembers help pay for homeless and trash services by contributing as much as much half of the $600,000 a year each of them receives from the city to operate their offices.

He also said Mayor Schaaf’s office budget is over $3 million. “The mayor should at least contribute a million dollars from her budget,” he said.
A large group from East Oakland Congress of Neighborhoods demanded full funding for their proposals to clean up flatland streets.

“Our children pass through piles of filthy, stinking garbage, human feces and the carcasses of dead animals to walk to school,” said Lidia, a spokesperson for the Congress.
“Some of you live in neighborhoods where this would never be allowed,” she said.

“We see the proclamations the Mayor is making to the news media about the wonderful things that she is doing… to address the trash issue. We’re here to say it is not enough. It is not even real,” said Fife.

“You have to be honest with the residents of this city,” she said.

James Vann was one of the speakers with the Homeless Advocacy Working Group (HAWG), which is requesting $4.2 million to provide portable bathrooms, shower facilities and clean water at homeless encampments throughout the city.

The $1 million the Mayor is proposing for homeless services is “a pittance—that’s nothing, and it’s not (even) true,” said Vann.

He said the city’s proposed $1 million in new homeless spending is eaten up by the $500,000 the city owes for work on Tuff Sheds that is already completed. In addition, he said providing sanitary services at one site costs about $250,000 a year.

Speakers for the Anti Police-Terror Project (APTP) called for redirecting some of the money that currently goes to OPD, which accounts for about 43 percent of the general fund.

As little as $10 million taken from police spending would make a dramatic difference in services for the homeless and elimination of trash on the streets, ATPT speakers said.