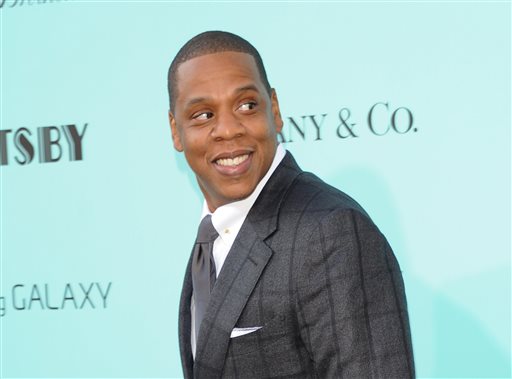 In this May 1, 2013 file photo, Jay-Z arrives at “The Great Gatsby” world premiere in New York Citys Avery Fisher Hall. Jay-Z is the founder of Roc Nation Sports (Photo by Evan Agostini/Invision/AP, File)

NEW YORK (AP) — BET is storming out of its corner with its first-ever rounds of professional boxing.

The network, which has traditionally programmed entertainment, music, news and public affairs for the African-American audience, told The Associated Press it has partnered with Roc Nation Sports to air up to nine live, two-hour telecasts of boxing events in the next 18 months.

The network promises the new program will “stretch the boundaries of the sport.”

The action inside the ring will be supplemented with a live musical performance as well as a DJ — a package of elements branded “throne boxing” by Roc Nation Sports and its founder, Shawn “Jay Z” Carter.

“It’s more than just boxing, it’s more than a sporting event, and that’s why we went into it,” said Stephen G. Hill, BET’s President of Original Programming. “One of our goals is to approach the personalities of the fighters and the in-between-rounds of entertainment differently than it’s been approached on television before.

“The action will be the same, but we plan to get into the background of the boxers as well. Boxing has been a sport that’s most attractive to males, and if we can attract more males to the channel, that’s fantastic. But we can keep the women engaged with the human interest stories we put around the boxers.”

He cited Ward’s story for its potential broad appeal.

A gold medalist at the 2004 Olympic Games, Ward since turning professional has won more than two dozen bouts. But injuries and a contractual dispute with his former promoter have kept him out of the ring for a year and a half.

Now, after signing with Roc Nation Sports in January, he’s returning to the action in his native Bay Area.

Asked about the challenge of his protracted litigation, Ward replied, “It’s OK now that it’s over with. But it was very, very difficult. I love this sport and I’ve given this sport everything I had. But I was ready to be done with it. But every time that I would write up a retirement speech, someone would stop me and say, ‘It’s not time.’ I appreciate that.”

“With the inactivity the last couple of years, it’s important for me to come back with a bang,” he said. “I not only want to win, but I want a knockout. I want to put on a great performance.”

With its entry into boxing, BET is harking back to one of television’s original programming genres. NBC was airing weekly boxing matches as early as 1946. In the late 1940s and early 1950s, as many as a half-dozen boxing shows could be found weekly on the handful of networks. NBC’s “Gillette Cavalcade of Sports” premiered in 1948 and aired Friday nights through 1960.

In the non-sports-TV universe of the current day, boxing has recently returned to NBC. It airs on Spike and Showtime. And it has been a tradition on HBO for decades.

BET hopes its own brand of boxing will be warmly received by viewers during this initial rollout.

“We hope the numbers will show that viewers want more,” said Hill. “And once we find there’s an interest, we’ll pull this thread as far as it can go.”

Other sports might also be in the cards, he added: “We want to present sports you’re familiar with, in new ways.”

EDITOR’S NOTE — Frazier Moore is a national television columnist for The Associated Press. He can be reached at fmoore@ap.org and at http://www.twitter.com/tvfrazier. Past stories are available at http://bigstory.ap.org/content/frazier-moore