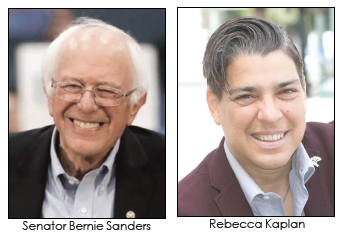 Former Berkeley Mayor and longtime friend of Senator Sanders, Gus Newport, who now resides in Oakland with his wife Kathryn Kasch, called Kaplan to let her know that Senator Sanders has decided to endorse her.

Sanders endorsed Kaplan because “she has been a strong advocate of fairness and justice, in the face of a handful of billionaires who are seeking special loopholes for themselves to the laws everyone else has to follow.”

Kaplan has been singled out for a blizzard of negative campaign ads after she said Lyft, the ride-sharing mega-corporation, should not be exempt from taxes or granted other monopolies and special treatment.

Since her statement, Lyft has spent hundreds of thousands of dollars attacking Kaplan – more than any other candidate this election.  Bernie Sanders has, throughout his life, also been a powerful advocate for tax fairness, and making sure billionaires pay their fair share.

Mayor Newport said, “I am just so pleased that my dear friend Bernie Sanders has endorsed Rebecca Kaplan. She is the most progressive candidate and has the experience of effective policymaking Oakland needs. Oakland voters should re-elect Kaplan to the Oakland City Council At-Large seat. Rebecca and Senator Bernie Sanders share core values, and both believe the billionaire corporate money in politics has to stop.”

“I am incredibly touched and honored to receive the endorsement of Senator Bernie Sanders.  I appreciate his many years of dedicated leadership fighting for a more humane and equitable society, and our shared commitment to fundamental fairness, as we work to make sure our democracy is not for sale, and that the needs of workers and community are protected.”

Kaplan has also received the endorsement and support of the Alameda County Democratic Party, firefighters, nurses, the Sierra Club, and numerous community leaders.

Businessman Geoffrey Pete said Kaplan has shown incredible courage in standing up to companies like Lyft that have targeted her with their negative advertising campaign, and she has steadfastly fought for equity for the Black community.”