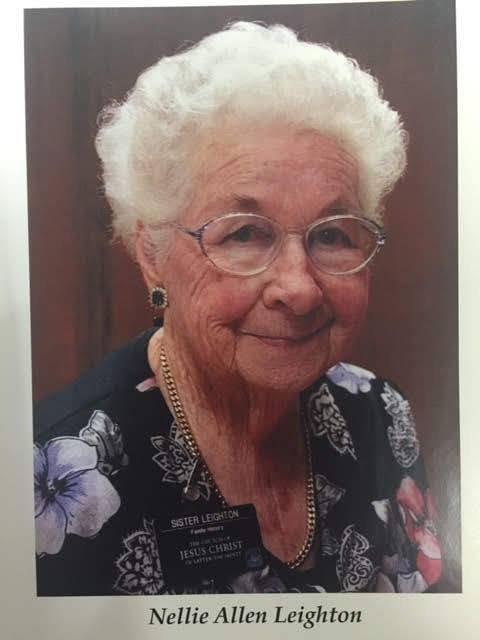 Nellie Allen Leighton, resident of Oakland from 1942- 2000, passed away peacefully on March 10, 2019, a mere two weeks after 300 family and friends flocked to Salt Lake City to celebrate her 100th birthday party. That impressive attendance spoke volumes for how many lives Nellie touched throughout the years.

When Nellie was born on February 18, 1919, in Provo, Utah to James Stephen Allen and Mary Jane Matson, there was no such thing as TV, cell phones, or the Internet. Perhaps those modest yet challenging times helped influence Nellie. Through a century of experience, Nellie saw many things happen that helped to cultivate her wise perspective on life.

As an adult, Nellie always seemed to choose the path of doing right by her family, friends, and community. As a mother of five, and loving wife to Paul Leighton, Nellie proved to be the quintessential provider of unconditional love, always there for her family no matter what. Her service for family and community extended to a seemingly endless array of organizations, from Sunday school teacher to Scout leader, to PTA president, which all reflected her incredible level of selflessness.

Nellie will be fondly remembered for taking her kids to exciting places, her knack for dressing in costumes for special occasions, and her penchant for practical jokes, which only begins to describe how much fun she was to her kids and generations of grandkids.

Tireless is a word that described Nellie. What else can you say, when, after decades of record-breaking “Manager of the Year” success with Tupperware, Nellie spent her ‘retirement’ managing a uniform store for 11 years. After that, as a devoted member of the Church of Jesus Christ of Latter-day Saints, she served three full-time missions before continuing as a service missionary up to her passing.

Nellie’s funeral will be held on Thursday, March 21st at 11am with a viewing at 10:00 a.m. at the Oakland 1st. Ward Chapel located at 4780 Lincoln Ave. Oakland. Interment will be at Oakmont Memorial Park in Lafayette.

A full obituary can be found at www.larkincares.com

New Report: 62 Percent of Those Stopped by OPD Are Black

Oakland May Name Road in Honor of Oscar Grant

City of San Leandro Invites Community Members to Partake in the...