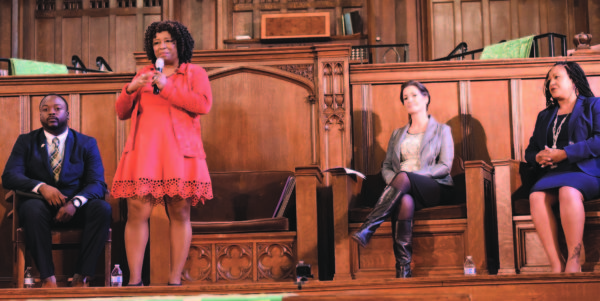 Oaklanders who attended Wednesday’s mayoral forum were impressed by the civic dialogue among the candidates, although some felt incumbent Libby Schaaf struggled to respond to the criticisms of her administration.

Sponsored by the TechEquity Collaborative, East Bay for Everyone, and the Northgate Neighbors, the forum was held at the First Presbyterian Church on Broadway in Oakland on Wednesday, Sept. 26.

Although there are other candidates in the race, this forum only invited those who had raised the highest number of individual contributions from the community, excluding candidates like Saied Karamooz, who is self-funded.

“Cat Brooks was a shining all-star, as usual,” said Oakland activist John Jones III. “But I would say Marchon Tatmon gets rookie of the year, and Pamela Price has lost no steam from her role as a civil rights attorney.”

Jones said he took pleasure in watching Tatmon’s growth throughout his campaign so far.

Community member Ken Pratt agreed that Brooks was “outstanding,” Tatmon had “upped his game,” and he said that “Libby’s up against the ropes.”

Mayor Schaaf praised what she considers her achievements over the last four years, including  the construction of Tuff Shed encampments that house a handful of the city’s homeless residents, the Oakland Promise nonprofit, the Ceasefire program designed to reduce crime and her decision to warn the city about upcoming ICE raids, which angered the Trump administration.

Tatmon discussed his Oakland roots, his dedication to housing Oakland’s unhoused families and his vision for a clean, safe, and economically resilient Oakland.

Nino Parker, founder of the Homeless Green Team, an organized effort to assist homeless encampments in keeping their area clean and safe, said, “In the forums right now, I’m listening very carefully for the mayoral candidates that have the most to offer for the poor and the homeless.”

In her two-minute-response, Brooks delivered a rapid-fire list of the many steps she would take as mayor to address the city’s homeless crisis, including utilizing City-owned abandoned buildings to immediately house Oakland’s homeless neighbors.

Addressing the issue, Pamela Price said, “There’s not a shortage of funds. There’s a shortage of political will” to respond to the homeless crisis in Oakland.

All the candidates supported the Prop. 10 campaign for the repeal of the state Costa-Hawkins Rental Housing Act that currently forbids municipalities from extending rent control to many residential buildings.

Prop. 10 will be on the ballot in November, along with Oakland’s local elections.

Oakland has ranked choice voting, which means every voter has three votes, ranked in order of preference.

OP-ED: Beyond the Bridge in Selma: The Suppression Never Ended

States Abandoning Juvenile Life Without Parole at a Rapid Pace