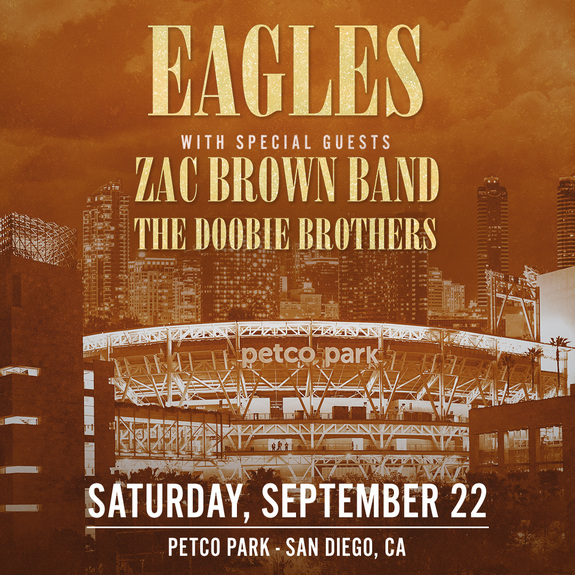 Concert goers rocked the night away on Thursday at San Francisco’s AT&T Park with the band synonymous with Americana California; soft rock band the Eagles. Along with the soulful Doobie Brothers and equally talented Zac Brown Band fans would enjoy of the last days of summer as the sunshine bared down in perfection with little or no breeze.

The Eagles, known for their mix of rock, country and lots of bass have garnered 6 GRAMMYs, 6 #1 albums and 5 chart topping singles. The Eagles – Don Henley, Joe Walsh, Timothy B. Schmit, with Vince Gill and Deacon Frey performed their classics; “Hotel California,” “Take It To The Limit,” “Lyin’ Eyes,” and the Western themed “Tequila Sunrise.” “New Kid In Town,” the funk of “One of These Nights,” Take It Easy,” and the bluesy “Heartache Tonight” were also performed. The light show for each act was spectacular reflecting vivid ultra red and blue colors as a large video screen ran larger than life images one into three.

The untimely death of Glenn Frey in 2016 left a void in the band that was filld by Frey’s talented son Deacon who joined the band in 2017. Frey’s son was humbled to be accepted by fans.

The familiar songs brought fans from as far away as Santa Rosa, Turlock and Tahoe.  Many stood the entire concert as couples swayed and ladies of girls night out gatherings bounced around together.

Beginning the night, the Doobie Brother’s played their classics “Minute By Minute” and “What  A Fool Believes.” The crowd sang the soaring lyrics in unision; “What a fool believes, he sees, No wise man has the power to reason away, What seems to be, Is always better than nothing, There’s nothing at all.” The country sounds of “Black Water” were also a crowd pleaser along with “Takin’ It To The Streets.”

The Zac Brown Band performed what seemed to be their entire catalog, on stage for 2 hours. Favorites included “Chicken Fried,” “Colder Weather,” “Toes,” and an ode Brown’s father, “My Old Man.”  A video montage displayed slices of Brown’s childhood with his dad at play.

“This is truly an honor playing before the Eagles,” said Brown.

A Perfect Ending, Zito vs Hudson

“Terrible Tom” Bowden Brings the Blues Back to 7th Street